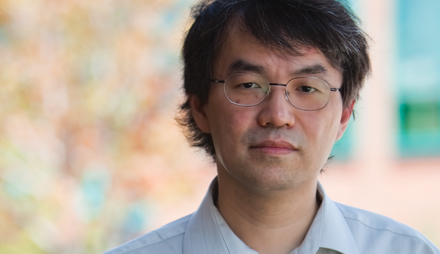 On its clear blue surface, Lake Sunapee appears calm, but there’s a lot of science going on in its depths.

Everything about the New Hampshire lake, from its blue-green algae to its water quality, is fodder for researchers. But what was learned about the lake wasn’t always filtering through to the people who live and play nearby.

Binghamton University’s Kenneth Chiu and his students set out to change that, putting their expertise in computer science to work for the good of the community. Chiu, his students and other collaborators created a website that allows people to harness tremendous amounts of information and learn what’s going on in those waters. In the process, both the computer scientists and the citizen scientists learned about designing technology for users in the real world.

When the Lake Sunapee Protective Association (LSPA) was founded in 1898, water-quality issues were tied to sawdust and trash in the lake and the level of the lake water. Today, the organization uses science to better advocate for the environmental vitality of the lake and its watershed. To that end, it built a water-quality buoy, which collects and transmits data every 10 minutes on weather and lake conditions.

“It quickly became clear that a buoy can generate an awful lot of data in a short period of time,” said June Fichter, executive director of the LSPA.

As part of its educational mission, the LSPA looked for a way to present that data to the public.

“Part of our mission is to explain it to kids in preschool, adults and everybody in between,” Fichter said. “How to appeal to all those people was tricky.”

The project got its start when Chiu and some colleagues proposed a project to engage nonprofit organizations in the design, development and deployment of advanced computer technology. It won support from the National Science Foundation, which wants nonprofits to learn how to use cutting-edge computer technology.

The website they created displays indicators such as water temperature, wind speed and dissolved oxygen, which can indicate the presence of organic matter and pollution.

Fichter said the project energized people in the Lake Sunapee group. “What’s exciting is that this will be easy to use, and it will draw people in to the science,” she said. “Of course, our ulterior motive is that it will be a new tool for them to learn about lakes and watersheds and how it all works. And, in the end, they as voters can influence public policy toward preserving watersheds.”

Chiu said the project provided valuable opportunities for instruction. “I think this was a good introduction for the students in how to interact with real users,” he added. “It gives them a head start.”

Chiu, whose research area is distributed systems, acknowledges the project didn’t push the envelope in terms of what’s possible in computer science. But when it comes to finding ways that his field can benefit society, the Lake Sunapee work was rewarding.

“This project provides a broad context for the research that I do,” he said. “It also provides a degree of reality check for computer science, in that it helps us understand better what people really want out of technology.”

In fact, the Lake Sunapee project deepened an interest in ecosystem modeling that Chiu will pursue with support from two grants.

Ecosystem modeling involves coming up with a set of equations and rules for how an ecosystem behaves. These models are often developed independently by different scientific communities. To answer questions relevant to society, these models need run together. That’s challenging from a computer science perspective because of differences among the models.

The National Science Foundation gave Chiu and his collaborators a grant of more than $1 million, with $238,000 going to Chiu. He and several colleagues have also received a grant from Amazon Web Services in Education to use its system to do ecosystem-modeling research in cloud computing.

Chiu used the example of a proposed golf course next to a lake to explain the promise of this work.

“Scientists know rain runoff from the golf course will affect water quality, but how much, and in exactly what way? Will it change the water color year-round, or just in late summer? Will it change the kind of fish in the lake? Well, if we can build a model of the lake in the computer, then we can simulate the lake,” he said. “We can build a simulated golf course, simulated fertilizer, have some simulated rain and so on.”

The Lake Sunapee Protective Association is online at http://lakesunapee.org [1]. To see the Binghamton team’s work, click on “programs,” then “GLEON buoy.”