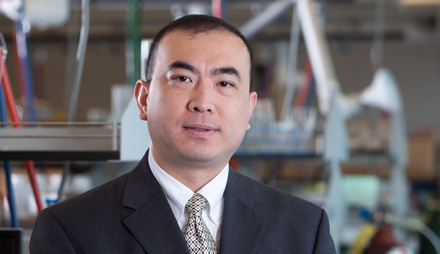 Some of today’s most innovative science happens at the places where one field of inquiry meets another. That’s precisely where you’ll find Changhong Ke, a Binghamton University mechanical engineer whose interests extend to biology and physics.

“Interdisciplinary work is of particular importance for discovery at the micro and nano scale,” he says. “This is because the properties and behaviors of small-scale structures that are building blocks of large-scale systems are typically influenced by a variety of physical forces.”

This so-called  “multi-physics phenomenon” often involves linkages among mechanical, electrical and chemical forces and opens doors to many technological possibilities.

Ke, who has developed unique ways of examining nanomaterials, brings this background to his work on DNA. He uses an atomic force microscope to observe DNA damage and repair at the molecular level.

“We are able to observe the morphology — the structure — of each individual molecule,” Ke says. “DNA is a very stable molecule, but it can experience damage. Some is from the cell and some is from radiation, mostly ultraviolet light.”

“There’s an internal strain in DNA,” he continues.  “One strand or two strands may get cut, which can mean a loss of internal strength. We observe the changes, and we can quantify how much damage the DNA experienced.”

A post-doctoral fellowship at Duke University provided Ke with an introduction to biophysics. At the time, he says, he had a high school-level understanding of DNA. These days, he can offer a brief refresher course along these lines:

DNA, or deoxyribonucleic acid, is found in every cell in the human body. Each strand contains all of a person’s hereditary information. These strands are packaged into chromosomes. One tiny variation in the DNA sequence can have dramatic results: giving someone a different eye color, for example, or putting someone at risk of developing a certain disease.

Nearly 60 years ago, scientists created the first model of the shape of DNA. And while that double helix structure — a twisted ladder — has since become famous, scientists are still teasing apart the mechanical properties of DNA.

That’s where Ke comes in.

“The mechanical property of DNA molecules is important to their biological function,” Ke says.  “We want to measure the force that stabilizes the double helix.”

He and several colleagues used atomic force microscopy to measure interactions in DNA at the single molecular level. The paper they published on the topic in Physical Review Letters in 2007 was named one of the most exciting projects in physics by the American Physical Society’s APS News.

“DNA is so important to us that any findings in this area can have a big impact,” Ke says.

With Jie (Jayne) Wu, an electrical engineer at the University of Tennessee who’s an expert in small-scale electrokinetics, he’s incorporating microfluidics into his study of DNA damage. They will use an electrical field to separate DNA based on the damage it has experienced, a method that’s potentially faster and more accurate than using an atomic force microscope to do the job.

With Binghamton mechanical engineering colleague Peter Huang, Ke is studying hybrid structures that combine DNA and carbon nanotubes. The two have a unique method of directly measuring the binding force between the DNA and the nanotube, Ke says.

Other researchers have demonstrated that carbon nanotubes can penetrate cell walls. If this binding interaction can interrupt the mechanical behaviors of DNA molecules so that the DNA no longer performs well — perhaps even killing the cell — it may be possible to use this technique in gene therapy.

Ke is also interested in the environmental and health impacts of these carbon nanostructures. They’re widely used in a variety of consumer products, he notes, but it’s not well understood what happens once they come into contact with human tissues.