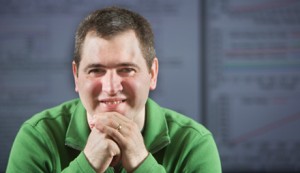 [1]A Binghamton University researcher aims to slash the energy used by computing systems ranging from smart phones to data centers.

Miller said manufacturing variations present a severe — and worsening — challenge for computer systems. Semiconductor chips produced by the same factory do not perform identically, which means systems are designed to accommodate the worst chips.

He envisions using machine learning to predict a chip’s performance. “When you bring a chip online for the first time, it will monitor itself and dynamically adjust its own behavior,” Miller said. “The chip will make sure it does the right thing on its own. That would improve not only energy efficiency but also the lifespan of the chip.”

What makes that such a big deal? Energy efficiency in chips is critical to extending the operation time of battery-powered devices, and it’s a huge factor in the cost of running larger systems, including data centers.

Current power-management solutions focus on large systems, said Miller, an assistant professor of computer science. His plan is to work at the chip level, offering more sophisticated control and a means of scaling the solution up to address systems of a variety of sizes.

Engineers assume worst-case conditions in designing computer systems, Miller said. These assumptions are built into a “guard band” that ensures the system will work for 10 years even with the worst possible chip from the factory, even if the voltage is too low and even when the temperature is too high.

“That safety margin accounts for about 70 percent of the energy used by a modern microprocessor,” Miller said. “What we want is to have the safety margin be the minimum it has to be so that the circuit will operate reliably.”

With a narrower guard band, he said, a chip could be 2.5 times faster or deliver the same performance using only a third as much energy. And with machine learning, a chip can reach an ideal tradeoff between performance and reliability, adjusting continuously over its lifespan.

Miller, who joined Binghamton’s faculty in 2012 after earning a doctorate at the Ohio State University, worked in private industry for more than 15 years.

He said other disciplines — cognitive science, linguistics and experimental psychology, in particular — inspired this direction in his research. The patterns of thought and engineering habits he cultivated while working in the private sector continue to help him, too. “I learned a lot from industry about doing the engineering part of this job,” he said. Miller said he often writes code to put ideas to the test quickly and enjoys helping students debug programs.

He is developing a short course for high school students that offers an analogy to introspective computing. Students will be challenged to come up with the careful scheduling required to operate a 22nd-century smart home with a restrictive amount of solar power and a set of activities that must be accomplished each day.