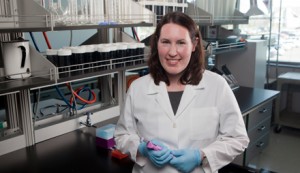 [1]Nanoparticles can be found in products ranging from cosmetics to clothes and from soda to snacks. But as versatile as they are, nanoparticles also have a downside, researchers at Binghamton University and Cornell University report in a recent paper published in the journal Nature Nanotechnology. These tiny particles, even in low doses, could have a big impact on our long-term health.

Lead author Gretchen Mahler, assistant professor of bioengineering at Binghamton University, says much of the existing research on the safety of nanoparticles has focused on their direct health effects. But what Mahler, Michael L. Shuler of Cornell University and a team of researchers really wanted to know was what happens when someone receives constant exposure in small doses — the kind you’d get if you were taking a drug or supplement that included nanoparticles in some form.

“We thought that the best way to measure the more subtle effects of this kind of intake was to monitor the reaction of intestinal cells,” Mahler says. “And we did this in two ways: in vitro, through human intestinal-lining cells that we had cultured in the lab; and in vivo, through the intestinal linings of live chickens. Both sets of results pointed to the same thing — that exposure to nanoparticles influences the absorption of nutrients into the bloodstream.”

The uptake of iron, an essential nutrient, was of particular interest because of the way it is absorbed and processed through the intestines. Mahler and the team tested this with polystyrene nanoparticles because of its easily traceable fluorescent properties.

“What we found was that for brief exposures, iron absorption dropped by about 50 percent,” Mahler says. “But when we extended that period of time, absorption actually increased by about 200 percent. It was very clear: Nanoparticles definitely affect iron uptake and transport.”

While acute oral exposure caused disruptions to intestinal iron transport, chronic exposure caused a remodeling of the intestinal villi — the tiny, finger-like projections that are vital to the intestine’s ability to absorb nutrients — making them larger and broader, thus allowing iron to enter the bloodstream much faster.

Humans consume about 100 trillion nanoparticles every day. Although the impact of chronic exposure remains somewhat unknown, the ingestion of dietary particles is thought to promote a range of diseases, including Crohn’s disease. With so many nanomaterials under development and with so much yet to be learned about nanoparticle toxicity and potential human tissue reactivity, Mahler and the team hope that their work, particularly the in vitro model, will provide an effective low-cost screening tool.

They plan to take a look at whether similar disruptions in nutrient absorption could be possible in other inorganic elements, such as calcium, copper and zinc. Also on the research agenda is the reaction of other nutrients such as fat-soluble vitamins A, D, E and K. And chickens and their intestines will definitely be part of this next phase of the study.

“The gastrointestinal tract of a chicken has very similar features to that of a human,” Mahler says. “We can learn a great deal from the way chicken tissue works, which means we can make better predictions about how humans will react.”