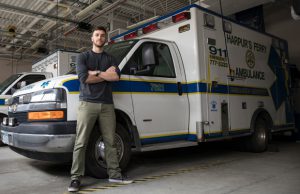 As a high school student in Syracuse, Thomas Hays played sports and musical instruments. He also learned about artificial organs and tissues.

Thanks to Project Lead The Way, an initiative that introduces students to STEM — science, technology, engineering and mathematics — subjects at an early age, Hays chose to research tissue engineering, the process of combining scaffolds, cells and biologically active molecules into functional tissues.

“It was science fiction come to life,” he says.

Now a senior biomedical engineering major at Binghamton University, Hays has a 4.0 average and a place working in the laboratory of Kaiming Ye, a professor and chair of the biomedical engineering department. “He’s a very smart and dedicated researcher,” Ye says. “He works hard, and he can solve a problem very quickly. His interests and his career goals are what made him stand out.”

Binghamton is one of the few universities working on 3D printing as a method of tissue engineering. Essentially, biocompatible material is “printed” in droplets that are then overlapped, eventually creating a bulky organ. This method allows for a lot more control over the “printing landscape,” Hays says.

Other schools, such as Harvard and Stony Brook University, are looking into a barrier in 3D printing known as the oxygen-diffusion limit, which says that a cell can’t survive outside of 100-200 microns from a vessel. “That’s like 1/10th of a millimeter,” Hays says. That’s why certain tissues, like skin and cartilage, lend themselves to the “printing” process more easily. They are relatively avascular, meaning they do not contain blood vessels.

Hays believes that in the next decade tissue engineering will make it possible to 3D print a fully functional organ created with a patient’s own cells or stem cells. For example, beta-islet cells — cells that produce, store and release the insulin hormone — are attacked and destroyed by the body’s immune system in Type 1 Diabetics. Tissue engineering may allow scientists to create beta-islet cells and produce a new artificial pancreas for these patients.

“Hopefully 3D printing will make something like the organ donor list obsolete in the near future,” Hays says.

In the meantime, Hays has found a way to save lives in the present day. He’s an emergency medical technician with the campus ambulance squad, Harpur’s Ferry. In the fall, he administered patient care and CPR that resuscitated someone in cardiac arrest.

“I was happy with how I responded,” Hays says. “It registered, but not emotionally. You realize you have a team. And if you learn how to work with your team, you’re never going to feel alone.”

Hays has been accepted into medical school for the fall, and he also looks forward to the possibility of using his engineering degree to become a biomedical consultant. He says he will always look at problems with an engineering mindset.

Hays and Rushi Shah, a fellow biomedical engineering student and Harpur’s Ferry EMT, realized there was not a device at the basic life support level to monitor respiratory heart rates automatically. They created an invention that they called a “respiratory quantifier,” which can measure and report respiratory rate in real time.

“I thought I would have to choose between biomedical engineering and medical school,” Hays says, “but in the end you don’t have to choose. You can do both.”