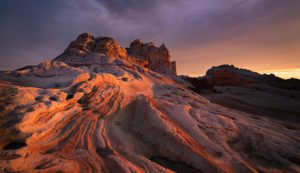 A striking photograph taken in Arizona took top honors in this year’s Art of Science competition at Binghamton University.

The contest, organized by the Office of Research Advancement and co-sponsored by the S3IP Center of Excellence, offers an opportunity to share the beauty of science through photographs and images that describe some aspect of research captured visually.

This is the fifth year our office has sponsored the competition and I continue to be impressed by the images submitted,” says Martha Terry, creative services manager and contest organizer. “As the entries come in, it is exciting to see the fields of study represented and the creativity that is exhibited by each entrant. I am pleased that enthusiasm for this competition continues and each year I look forward to the next.”

Images were scored in two categories: The World Around Us, featuring images in which the subject is visible to the naked eye, and Visualizing the Unseen, for images captured with the use of optics that extend beyond what the eye can see.

An image titled “Blue Flame” by Jessica Fridrich, distinguished professor of electrical and computer engineering, won first place in The World Around Us as well as Best in Show. She will receive a new iPad.

“The early southwest settlers had to cope with many challenges, one of them being water shortages,” Fridrich wrote in a caption that accompanied her entry. “White Pocket, the result of an ancient landslide depicted in the picture during a dramatic sunset, provided this source during the monsoons through natural depressions in sandstone.”

“Water has important biological functions in the tissue and organs of living organisms,” they wrote in their caption. “Using a lab-built stimulated Raman scattering (SRS) microscopy, the distribution of water (pseudocolor cyan) and cartilage (yellow) in an intact mouse ear tissue can be directly seen at a subcellular level without the use of chemical labeling.”

The two first place images, along with a selection of other entries from the 2020 and 2021 competitions, are on exhibit in the lobby of the Center of Excellence Building at the Innovative Technologies Complex. You can also see all of this year’s entries in a video.