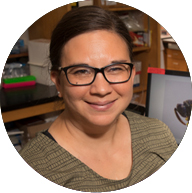 Kirsten Prior’s research takes her all over the country, as she seeks out bugs most people try to avoid.

“Meeting some landowners and talking to people, I just came upon a part of this oak gall-wasp story. There was a master’s student in the ’90s who did a little bit of work on it, and the Canadian Forest Service had done a little bit of research on it, but it just seemed to be this open question,” Prior says. “I thought it was relevant and a really cool study system to ask questions about climate change and range expansion.”

Prior, an assistant professor of biological sciences, earned a bachelor’s degree from Western University and a doctorate in biology from the University of Notre Dame.

She documents the wasp as well as the insect communities surrounding it, including other oak gall-forming wasps it interacts with and the parasitic wasps that attack and prey on them. N. saltatorius is of particular interest because of its “ecological release” — the removal of factors limiting its growth — and its subsequent outbreak as the insect’s range has expanded to Vancouver Island, British Columbia. The expansion damaged several oak tree populations in an already threatened western oak ecosystem.

The $23,828 National Geographic grant made it possible for Prior and her lab, a mix of undergraduate and doctoral students, to survey these wasp communities at 18 different sites along the west coast. They have identified at least 25 oak gall-wasp species at these sites and will likely discover hundreds of parasitoid wasp species that they harbor.

“Parasitoid wasps are some of the most diverse insects in the world and some of the most functionally important,” Prior says. “What they’ll do is find their insect host that’s eating a plant and lay their egg into that host, and then their larva eats the host larva and kill it. They keep in check things like agricultural pests and tree pests, such as N. saltatorius.”

This work and Prior’s research questions will expand in the upcoming months with support from a two-year, $207,317 National Science Foundation grant.

Prior and her team also study other ecological systems. Along with wasps, she focuses on ants — such as those found on acacia trees in Kenya’s East African savannahs and those spreading the seeds of understory plants in eastern deciduous forests like Binghamton University’s Nature Preserve.

Carmela Buono, who is pursuing a doctorate in ecology at Binghamton, works with Prior and the ants of these eastern forests. Buono’s interested in how humans use land and disrupt ecosystems. This summer was her second collecting data and first without Prior’s assistance.

“My first summer she helped a lot with helping to frame the scope of the project. She’s very much a go-getter when it comes to collecting data, and she thirsts to be in the field,” Buono says. “She’s willing to get dirty and put her field boots back on and run out there. If she wasn’t there my first summer out in the field, I would have been panicking. She’s a true field ecologist through and through. It’s in her blood.”

One important concept within these studies is to understand how global transformation — land use change, climate change and the growth of invasive species — affects these important relationships and ecosystems.

Prior says that although her goal is to document the importance of these species and their interactions in ecosystems, she would also like her lab to focus on conservation and ecological health.

“I want my lab and field work to move towards restoration and management as well,” Prior says. “With the host-parasitoid work, it’s thinking about biological control — ‘can you introduce natural parasitoid populations to help control insect pests?’ With this ant project, we are still spending time documenting how changes are affecting this important mutualism, but our next steps are to think about restoring these communities.”

Like this article? Please share!
biologyecologywasp
1
Math educator innovates in and out of class
A fleet-footed scholar