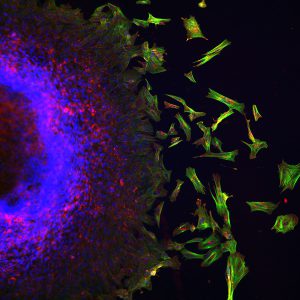 Kirk Butler, a doctoral candidate in biomedical engineering, worked with undergraduate Alondra Osorno on the entry that took Best in Show and First Place in the Visualizing the Unseen Category. Here’s how Butler described the image, titled “Migration into Mesenchyme:” “Heart epithelial cells (nuclei in blue), grown from stem cells, migrate outward from a central aggregate mass and transition into fibroblasts. The presence of smooth muscle actin (red) within a pronounced actin cytoskeleton (green) suggests these are contractile myofibroblasts, which play an important role in heart wound repair and fibrosis.”

Butler and Osorno created the image while doing research in the lab of Tracy Hookway, an assistant professor of biomedical engineering.

Jessica Fridrich, distinguished professor of electrical and computer engineering, won First Place in The World Around Us Category for her photograph titled “Visceral.” That means the Watson School of Engineering and Applied Science can claim both winning entries this year. 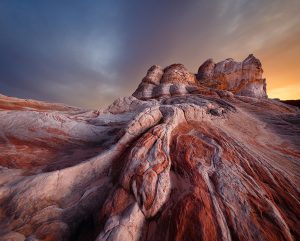 Here’s how Fridrich described her submission: “White Pocket in Arizona is the result of an ancient landslide. In this photograph, the amorphous formations contrast with a dramatic illumination due to sunlight scattered on smoke from a nearby wildfire.”

Martha Terry, creative services manager in the Office of Research Advancement, coordinated the competition. She notes that advances in imaging technology and tools mean that scientists have an increased ability to generate exciting data as well as to create compelling works of art. This contest offers an opportunity to share the beauty of science through photographs and images that describe some aspect of research captured visually.

“I’m excited and impressed with the vast variety of images this year,” Terry says. “It brings attention to the creativity of our campus research community.”

Images were entered in one of two categories and then evaluated based on scientific significance, originality and artistic and visual impact. In The World Around Us, researchers entered images in which the subject is visible to the naked eye. Visualizing the Unseen includes images captured with the use of optics that extend beyond what the eye can see, such as microscopes and telescopes, or models of scientific phenomena or processes or interpretations of scientific information.

All of the entries are featured in this video: