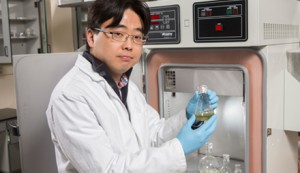 A Binghamton University engineering researcher designed a biological solar cell that’s a million times more effective than current technology. Preliminary data on Seokheun “Sean” Choi’s next advancement is a thousand times better than that. His cell also works in the dark, and is self-sustaining.

The new designs don’t make biological solar cells practical, yet. But they do take them out of the realm of “absurd” and place them squarely in the realm of “someday soon.”

Current photovoltaic cells generate watts of energy per square centimeter. A solar chip about the size of your fingernail can power a simple handheld calculator. Existing biological cells — which use photosynthesis to generate electricity — produce picowatts per square centimeter — a trillionth of a watt. To power that same calculator, the cells would stretch 20 meters wide and from Binghamton to Ireland. Absurd.

Choi’s first biological solar cell produces a million times more energy, microwatts per square centimeter, so the calculator could operate with a solar panel that fits on a trailer home roof — just 20 meters by 5 meters. His findings were recently published in the Royal Society of Chemistry’s journal Lab on a Chip.

And Choi’s latest experiment churns out milliwatts per square centimeter — reducing the calculator’s solar panel to a backpack-sized 8 inches by 20.

That brings it into the range of practical application, says Hongseok “Moses” Noh, an engineer and professor at Drexel University who specializes in lab-on-a-chip technology and applications. “Milliwatt power should be sufficient to meet those needs,” Noh says. “But the device, so far, is too big for hand-held systems, honestly.”

If Choi can reduce the cell to a tenth of its size while maintaining milliwatt power density, it would be enough to power hand-held blood analysis devices or air-testing machines. “This is one of very few miniaturized bio-solar products,” Noh says, and it’s worth following Choi’s progress.

What makes Choi’s approach different? Existing biological solar cells use a thin strip of gold or indium tin oxide as an anode between the bacteria and an air cathode. Not very efficient, and the bacteria eventually die because they lack air.

Choi uses a carbon anode immersed in the bacteria-laden fluid — a pretty peridot green in a lab flask. More efficient, and because the solution has access to air, it’s self-sustaining. It also uses the plant’s natural respiration to draw energy from the sugars in the cells to keep power up even if light is low.

“I have no idea about microbiology; I just bought the bacteria and followed the instructions to culture it,” he says. But millions of bacteria species abound, and he plans to experiment to find the most productive combination.

Or, he suggests, he might work with bioengineers to develop a bacterium with its photosynthetic engine on the cell’s surface instead of deep in its heart. That would be another order of magnitude more productive because less energy would be wasted just going from the heart of the cell to its exterior. He has received seed funding from Binghamton’s Transdisciplinary Area of Excellence in smart energy to continue this work.

Choi says he’s confident he’ll eventually reach watt-level energy density, comparable to photovoltaic cells. “I can get that,” he says. “We have room for improvement.”