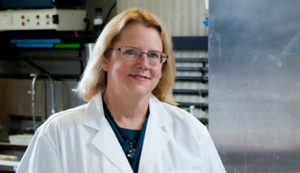 For years, scientists have been searching for ways to reduce the debilitating side effects of anti-cancer drugs. Antibody-drug conjugates (ADCs) can target cancer cells without affecting the healthy cells that surround them, but only if the problem of connecting the drug to the antibody is solved.

At Binghamton University, Susan Bane thinks she’s found an answer: an ADC that uses a boronic acid to bind cancer-fighting drugs to the proteins on the surface of cancer cells, creating a chemical reaction that could be well-suited for drug delivery, with the potential to avoid the complications of chemotherapy and radiation.

“Killing non-cancer cells is where side effects come from, which is why this research is so important to pharmaceutical companies,” says Bane, a professor of organic and biological chemistry who received a $50,000 investment from the SUNY Technology Accelerator Fund (TAF) in June. “You can make antibodies that recognize very, very specific things on the surface of cancer cells, things that are in much higher abundance than they are on a normal cell. These antibodies can attach themselves to the cancers, making the specific bonds that you want to see between the drug and the antibody. There aren’t a lot of chemistries that can make that happen efficiently, but we believe this method will be fast enough to use in a clinical setting.”

For the past 30 years, Bane’s cancer work has focused on microtubules, intracellular structures that are involved in cell division and organization. In this most recent breakthrough, she was conducting basic research on microtubules, trying to speed up a chemical reaction, and decided to add boron. Bane expected the reaction to take hours; instead, it finished within seconds, providing an a-ha moment that pushed her research into a new direction.

“We found it by accident, while were working on a completely different project,” Bane says. “We thought that if we tried the reaction with boronic acid, we could make it faster. Not only did we make it faster, we made it thousands of times faster. We thought, ‘What just happened?’ Chemists had made these kinds of molecules before, using a much slower process, but our pieces just snapped together. We were completely blown away, and that’s how we ended up here.”

The result of this latest research, patented as “Rapid and efficient bioorthogonal ligation reaction and boron-containing heterocycles useful in conjunction therewith,” has distinct advantages over products currently on the market. First, there’s speed, which should make the molecule much easier to produce and much quicker to react. Second, its reagents are more biocompatible, so there aren’t any concerns about its toxicity in the human body. Third, it’s able to work well in water, even at highly diluted levels, and can be used without having to eliminate excess reagents after treatment.

Like other bioorthogonal chemical reactions, which are increasingly being used in personalized medicine, Bane’s product can be carefully controlled for consistency. Plus, this same patented process has potential applications in medical imaging, where it could create radioactive molecules to make PET scans safer, more efficient and less expensive.

“We think this reaction has a lot of potential utilities, and we’re interested in seeing where it can go,” Bane says. “One step is to reach across the academic community, let people know about our work and find out where they can take it. Another is to move outside academia, to places that have the resources to develop this. We’re at the stage now where we want to show this process can work on a larger scale and in a more controlled environment. But first, we have to get this into the hands of people with enough resources to take it to the next step.”

That’s where SUNY’s Technology Accelerator Fund comes in. To bring the patent closer to clinical trials, Bane is using her investment to manufacture experimental quantities of the novel chemical reagents and modified antibodies, purchase the commercial material currently available and begin testing the two head-to-head in her Binghamton laboratory. At the same time, she has begun leasing the technology to outside labs, where it’s being tested for a variety of potential biomedical and pharmaceutical applications.

“The more material that gets out there, the more people will be doing basic research, the more peer-reviewed publications we’ll have and the more interest will be generated for this type of chemistry,” Bane says. “Drug development is enormously expensive for pharmaceutical companies, and before we can find investors, we need to show that this process will work in a much more controlled environment. TAF is helping us reach the stage where our product will be more attractive to potential licensees, including the companies that could ultimately develop this for the marketplace. Getting the TAF grant is showing people that this project has commercial viability.”