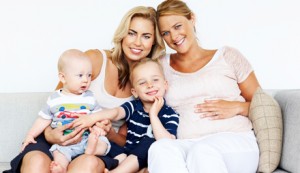 Members of the Interdisciplinary Research Group for the Study of Sexuality and Gender conducted a study of people’s reactions to the parenting behaviors of gay and straight parents. Their results showed a clear pattern of negative reactions from study participants toward a gay couple engaging in the same negative parenting behaviors as a straight couple.

Sean Massey and Ann Merriwether of Binghamton University and Justin Garcia of the Kinsey Institute at Indiana University published the results of their study earlier this month in the Journal of GLBT Family Studies.

“We noted that when parents displayed favorable parenting behaviors like comforting an upset child, gay and straight parents were judged in a similar, positive manner,” said Massey, a research associate professor of women, gender and sexuality studies.  “However, if parents got frustrated — raised their voice or slapped their child on the hand — the gay parents were judged more negatively than the straight parents.”

This marked difference in the study groups’ reactions is significant, he said. While no parent is perfect, the researchers believe that holding gay parents to a different standard adds additional stress to the already stressful job of parenthood. It can also negatively affect their chances of adopting or becoming foster parents.

“We feel that it is very important for social workers and adoption counselors to be made aware of the effects of modern anti-gay prejudices and they need to educate themselves and develop policies that help protect against these potential biases,” Massey said.

There is a shortage of people stepping up to take in hundreds of thousands of children who are waiting for foster families or adoptions. The gay community could be a resource for many of these children, but this study indicates that if judged more harshly than their straight counterparts, gay parents are at a disadvantage.

“Raising awareness of these attitudes is a critical step in being able to utilize a potentially valuable pool of prospective adoptive and foster parents,” Massey said, “but it is also vital to improving the day-to-day lives of our families and our children.”

The American Academy of Pediatrics recently issued a policy statement supporting same-sex marriage and reiterating its support for the adoption of children by gay families. The researchers say that with strong support for gay marriage coming from the medical and psychological professional organizations, and with increasing support among the general public (58 percent of whom now support same-sex marriage), the next frontier for gay rights may be same-sex parenting.

Overt and hostile prejudice may indeed be diminishing, but Massey said biases continues to affect the lives of lesbians, gay men and their families. “Prejudicial judgments, however subtle, that serve to limit access of these families to potential support and resources ultimately harm today’s youths,” he said.

The study was published in the Journal of GLBT Family Studies and is available at the journal’s website.