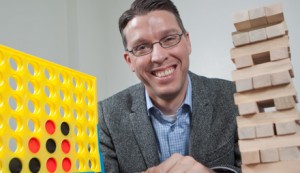 A Binghamton University psychologist plans to recruit 1,000 area families to participate in a new study aimed at identifying risk factors for childhood depression and anxiety.

Brandon Gibb, associate professor of psychology and director of clinical training at Binghamton University, said he’s interested in genetic and environmental factors that may contribute to anxiety and depression. Identifying such factors early — he’s studying 7- to 11-year-olds — may make it easier to figure out which children need extra help before they hit the turbulence of adolescence.

The study will zero in on “attentional biases,” which occur when children and adults focus their attention too much on, or have difficulty pulling their attention from, something negative or threatening in such a way that it affects their mood for a prolonged period.

“We like to think of things in evolutionary terms,” Gibb said. “It’s an advantage, if you see something threatening in your environment, to pick up on it quickly so you can either fight it or run away. However, if you are constantly looking out for danger even when you are in an objectively safe environment, that can lead to problems with anxiety.  With depression the attentional bias appears to be different; there’s no bias in where you initially attend. But once you get stuck on something negative, then you have a hard time pulling yourself away from it.”

As Gibb embarks on this four-year study, with $2.9 million in support from the National Institute of Mental Health, he’s also wrapping up an earlier project. In that study, 255 children and their mothers were assessed every six months for two years. The team is still analyzing its data, but Gibb said it’s already clear that children whose mothers have experienced depression have a higher risk of being depressed themselves. Their lives also have a lot more stress. “If you have a mom with a history of depression,” he said, “your life is more stressful: at home, at school and with your peers.”

That project has informed the new one, and Gibb said he and his colleagues hope to find out more about which components of attention are disrupted in depression and anxiety. “We’re trying to tease apart what’s unique to one or the other as well as what’s shared by both disorders,” he explained.

The researchers will look at the combined influence of a number of genes operating within brain regions thought to underlie these patterns of attention and mood. Gibb’s team includes colleagues at Stony Brook University, Providence VA Medical Center, Rhode Island Hospital and the University of California, Davis. All of the research subjects will be drawn from the Binghamton area, with the other researchers focusing on the genetic testing.

This study fits into a broader effort in psychology, in which disorders have historically been diagnosed based on clinical observations. Now, the field is trying to base diagnoses not only on such observations but also on findings from genetic and neuroimaging research. “We think attention is a key mechanism that cuts across current diagnostic boundaries,” Gibb said.

Suicide is the third-leading cause of death among 10- to 14-year-olds and 15- to 24-year-olds, according to the Centers for Disease Control and Prevention. Gibb said he’s motivated by the need to do more than document that problem; he wants to do something about it.

“We know that kids get on a developmental trajectory, and we know it’s a lot easier to change that trajectory the earlier you catch it,” he said. “Both risk and resilience start early.”

How do you spot depression or anxiety in a child? First, you have to differentiate normal ups and downs from more enduring problems. “Everyone will have a really anxious day or a really sad day every once in a while,” Gibb said. “But when it lasts for weeks on end and interferes with school work or friends or something else, we know it’s a problem. In kids, with depression and to some extent with anxiety, it may show itself as irritability more than sadness or fear. That’s the only real difference from how depression or anxiety looks in an adult.”

There are promising interventions, he added. But most of them are in use with adults because these disorders aren’t as well understood in children.

“In the 1980s, there was a lot of discussion about whether kids could even get depressed,” Gibb said. “Now we know they can, and we’re trying to figure out what to do about it. With these early markers, we can spot the kids who are at risk and do something.”

Binghamton University researcher Brandon Gibb is looking for children ages 7 to 11 to participate in his new study along with one of their parents. Parents and children are eligible to participate whether or not they’ve experienced depression or anxiety. There’s no residential requirement; people have traveled an hour to participate in previous studies in this lab. The four-hour commitment includes time for snacks and games mixed in with the assessments. Parents and children are paid for their time. Evening and weekend appointments are available. Call 607-777-3304 to schedule a session.