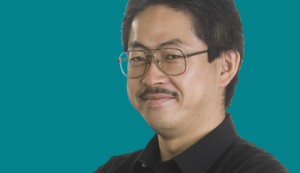 Binghamton University researchers believe it’s time for a new way of thinking about how ideas emerge and how people work with one another.

“What we propose is to make a paradigm shift,” said Hiroki Sayama, an assistant professor of bioengineering. “Let’s not look at the individual person first. Let’s look at the ecology of the ideas on the table. We assume that there are a bunch of different solutions to a problem. We are trying to describe the evolutionary dynamics of ideas using biological terminology such as adaptation, variation, mutation and so on.”

Sayama and more than 15 other faculty members meet regularly to discuss the collective dynamics of complex systems, which are basically huge networks made up of individual components whose behavior is difficult to predict. The group goes by the nickname CoCo.

“Even if you understand each particle or person,” Sayama said, “the interaction creates more than that. That’s the key idea.”

Complex systems include the stock market, the brain and the Internet, but human decision making has been the CoCo researchers’ focus recently.

“We know that quite often teams don’t work,” Sayama said. “Five people should be five times more capable than an individual, but sometimes that doesn’t happen. Let’s say you’re a team leader. What would make your team most productive? It’s not a trivial question.”

In fact, CoCo recently received a $550,000, three-year National Science Foundation (NSF) grant to support a project focused on an evolutionary perspective on decision-making. The funding will allow the team to carry out systematic theoretical simulations as well as some experiments involving humans to see if the concepts work in real life.

The NSF grant builds on a $10,000 Interdisciplinary Collaboration Grant the group received from the University several years ago. That got the group started and led to a couple of papers exploring some of these ideas.

CoCo is “radically interdisciplinary,” said Sayama, director of the group and principal investigator for the NSF grant. The researchers involved come from entirely different fields – ranging from English to bioengineering and economics to public administration – and didn’t even share a common vocabulary in which to express their ideas at first. For months, members of the group spent a lot of time just explaining the fundamentals of their fields to one another.

“Yeah, it really was,” said Shelley Dionne, an associate professor in the School of Management and a co-principal investigator for the NSF grant. “I had to get over what Hiroki was saying, which was, ‘It doesn’t matter about the individuals. We can give them any characteristics.’ I’m from a psychology-based field and characteristics are all that matter to me. That took me a year, to figure out how we were going to work on that. I had never seen people represented as faceless and nameless. We’re all about details.”

The group’s regular discussions continue to be eye-opening for all involved, said Dionne, who noted the NSF expects interdisciplinary approaches more and more. “When you bring people with different backgrounds together, you sometimes get better decisions,” she said.

The new CoCo project has implications for anyone who works in a group, whether in the corporate world or on an athletic team.

“Can we think of anyone who doesn’t work in a group anymore?” Dionne asked. “It’s the rare job where you’re isolated in a cubicle all day and don’t talk to anyone. People realize better decision-making in the workplace has a large impact on organizations.”

The Binghamton group studying the collective dynamics of complex systems, or CoCo, meets about once a week. The principal investigators for the new CoCo project funded by the National Science Foundation are Hiroki Sayama and Craig Laramee of the Bioengineering Department as well as Shelley Dionne and Francis Yammarino in the School of Management.

For more details about CoCo, including the schedule for its informal seminar series this semester, visit http://coco.binghamton.edu.

Like this article? Please share!
0
Piling on the homework: Does it work for everyone?
'Green' research at Binghamton