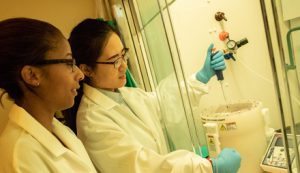 Binghamton University kept its place among the elite schools labeled “R1 — very high research activity” in a new list released by the Carnegie Classification of Institutions of Higher Education.

Schools with at least $5 million in research expenditures that grant at least 20 doctorates yearly are eligible for consideration by the Carnegie Classifications as R1 or R2 campuses. The new R1 list of doctoral universities includes 146 schools, among them world-famous institutions such as Harvard and Princeton. Binghamton is one of 11 New York universities on the list.

President Harvey Stenger noted that it was a significant achievement when Binghamton was first named an R1 school in 2018-19. The classifications are updated every three years.

“Staying on the list requires a sustained, high-level effort from researchers and graduate programs across campus,” he says. “Our faculty have done a remarkable job during the past several years, advancing our understanding of significant topics ranging from Parkinson’s disease to information security.”

Bahgat Sammakia, vice president for research, says Binghamton also rose slightly in the recent Higher Education Research and Development (HERD) rankings published by the National Science Foundation. The HERD Survey is the primary source of information on research and development expenditures at U.S. colleges and universities. The survey collects information on R&D spending by field of research and source of funds. NSF also gathers detail on types of research, expenses and headcounts of R&D personnel.
Binghamton is ranked 152 on the latest list, up from 158 a year ago. The campus now ranks 108th among public universities.

“It’s exciting to see Binghamton’s investments in research infrastructure and faculty hiring pay off,” Sammakia says. “Our scholars are committed to mentoring graduate students and to solving pressing challenges related to the pandemic, the environment, technology and human health. We have several ambitious new efforts in the pipeline, too.”

Those initiatives include projects such as the R&D facility under construction at the Health Sciences Campus in Johnson City and a new multimillion dollar NSF grant that will fund scholarships for students focused on cybersecurity.

Binghamton is also leading a coalition of partners on the New Energy New York project, which aims to establish a domestic supply chain for lithium-based batteries. The group was recently named a Phase 1 awardee and finalist for investment through the American Rescue Plan’s Build Back Better Regional Challenge. Finalists will compete for federal funding of up to $100 million through the Economic Development Administration.