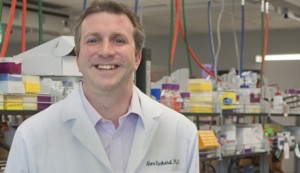 Listening in on bacterial conversations could be the solution for improving chronic wound care, according to a team of Binghamton University researchers whose findings have been published in the Journal of Applied Microbiology.

“Bacteria, often viewed as simplistic creatures, are in fact very sociable units of life,” said Alex Rickard, assistant professor of biological sciences. “They can physically and chemically interact with one another and are quite selective about who they hang out with. How bacteria might communicate in chronic wounds, however, was somewhat of a mystery.”

Working with researchers and physicians at the Center for Biofilm Engineering at Montana State University and the Southwest Regional Wound Care Center in Lubbock, Texas, Rickard and a team of undergraduates were able to identify specific types of chronic wound bacteria and to test their ability to produce cell-cell signaling molecules.

“Based on our findings, we think that most resident species – the ‘good’ bacteria that live on us and don’t cause disease – produce AI-2, while the pathogenic species typically produce AHLs,” said Katelynn Manton, who was part of the undergraduate team and is now pursuing her doctorate. “And it didn’t seem to matter what kind of chronic wound we looked at – diabetic ulcers, vascular ulcers or environmentally induced chronic wounds. They all indicated a presence of possible AHLs or AI-2s.”

For Randy Wolcott, director of the Southwest Regional Wound Care Center, a clearer understanding of how these bacteria function is particularly important. “AI-2’s may be the best explanation why our commensal coagulase-negative Staphylococci and other synergistically helpful bacteria are immensely beneficial to us when they reside in a normal skin environment,” he said. “However, when they turn or are coerced to a dark side in a wound or infected medical device, they can cause so much devastation and death.”

According to Rickard and his team, the typically pathogenic bacteria communicate in one language; the “good” bacteria in another. The big question now is whether any of them are bilingual and can listen in on one another’s “conversations.” Being able to interpret – or perhaps even guide – these cell-cell signals could influence wound development.

“Can we steer pathogenic bacteria away from what is, in essence, a ‘mob’ mentality and prevent them from communicating?” asked Rickard. “Or can we tell the mob to do one thing when they should in fact be doing something completely different?”

Manipulation of cell-cell signaling has the potential to be an effective strategy for wound healing, particularly in influencing “bad” bacteria, which are particularly resistant to antimicrobials. Bacteria such as Pseudomonas aeruginosa tend to have a repertoire of aggressive tactics that allow them to maintain a strong presence in chronic wounds. As a result, they are able to multiply rapidly, driving out the resident species and hampering wound healing.

“When bacteria form biofilms, as they do in chronic wounds, they become protected from killing by antimicrobial agents,” said Phil Stewart, director of the Center for Biofilm Engineering at Montana State University. “Topical antiseptics, systemic antibiotics and the body’s own defenses are unable to clear these infections. We need alternative strategies – such as jamming bacterial communication – to help weaken the biofilm defenses. Listening in on the bacterial signals may also provide a way to diagnose the state of a chronic wound.”

With finding from the National Institutes of Health, Rickard hopes to expand the study.

“Our goal is to include a wider range of wound types and compare the types of signals present,” he said. “By doing this, we expect to be able to develop novel methods to monitor wound healing and ultimately prevent the establishment of chronic wounds.”