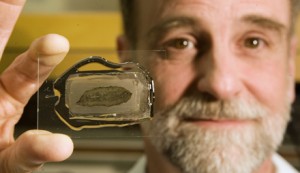 William Stein, associate professor of biological sciences, and colleagues at the New York State Museum in Albany and Cardiff University in the United Kingdom, wrote about discoveries made near the Gilboa Dam in Schoharie County. The area, widely cited as home to the Earth’s oldest forest, has yielded tremendous tree trunks from the Devonian era, meaning they’re roughly 380 million years old.

These trunks have been studied by paleobotanists for about a century, but scientists could only guess what the tops of the trees looked like. Giant seed ferns, perhaps? Something like a modern palm tree?

There was a lot of speculation and a few ambitious drawings, but no actual data to back up any of the possible reconstructions.

Two years ago, researchers at the State Museum called Stein to report the discovery of what they thought was an “odd specimen,” a fossil complete with an extensive trunk system and a crown attached.

“I just dropped my jaw,” Stein recalled. “I could not believe what I was seeing. It’s astonishingly large and complete.”

The fossil, more than 12 feet long, offered the first evidence of how big and complex the trees were and what their tops, or “aerial portions,” looked like.
“They were able to collect this thing as you would a dinosaur,” Stein said of the State Museum.

Nearby, a second 19-foot-long fossil reinforced some of the data offered by the first. “We now really have these trees nailed,” Stein said. “We solved a mystery that’s been around for 100 years. It looks remarkably tree fern-like.”

The Gilboa site has been of intense interest to paleobotanists since the 1920s, when excavation for the dam, a New York City water project, began. The work turned up large upright tree stumps from a fossil forest, some of which are on display at the Gilboa Dam site and New York Power Authority Blenheim-Gilboa Visitor’s Center in Schoharie County and at the State Museum. An early researcher, Winifred Goldring of the State Museum, named them Eospermatopteris.

Stein and his colleagues believe the trees, which predate the earliest dinosaurs by about 135 million years, were more than 26 feet tall, with a system of frond-like but leafless branches at their very tops. The new finds have helped to determine that Eospermatopteris belongs to the Cladoxylopsida, a class of big vascular plants with spectacular morphology for their time. Though they’re now extinct, Stein can point to possible modern-day descendants of these trees — including ferns and horsetails — as he walks through the campus greenhouse.
One reason scientists are so fascinated by these trees is that they were part of “aforestation,” the original greening of the earth. That process had a major impact on the planet’s climate, carbon cycling and, ultimately, what kinds of animals evolved in these ecosystems.
“Science really is these kinds of discoveries,” Stein said in a slightly hushed voice as he looked over photos from the Gilboa site. “No one has ever seen this before.”