Unravelling the risk for schizophrenia 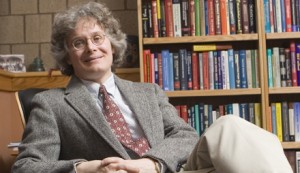 In a study published in this month’s Journal of Abnormal Psychology, Mark F. Lenzenweger, a professor of clinical science, neuroscience and cognitive psychology at Binghamton University, State University of New York (SUNY), is the first to have found that abnormalities in eye movements and attention can be used to divide people into two groups in relation to schizophrenia-related risk.

“Schizophrenia affects one in every 100 people,” said Lenzenweger, who considers it the costliest form of mental illness known to humankind. It has a strong genetic component; about 80 percent of what determines schizophrenia is related to genetic influences.

“Not only does it impair people’s cognitive, emotional, social and occupational functioning when it’s going in full symptomatic form,” he said, “it stays with people across the lifespan. Schizophrenia starts early in life, beginning anywhere from 15 to 30, and continues onward. What you have is a person who is impaired, has been removed from the workforce, as well as requires lifelong care and there are immense costs attached to their illness.”

According to Lezenweger, prior studies started with someone who had the illness and then backtracked to find deficits, such as eye tracking and sustained attention problems.

“What I said we needed to do was to go into the general population and measure those traits – those neurocognitive processes – and see whether impairment in those processes predicts schizotypic features. So I really turned the whole question on its head,” said Lezenweger.

The study, funded by a $100,000 Distinguished Investigator Award from the National Alliance for Research on Schizophrenia and Depression, or NARSAD, involved 300 adults drawn from the general population. The findings suggests that the manner in which the eyes can follow a target and how well one can pay attention to a task together help to pinpoint risk factors related to schizophrenia.

“I was able to integrate several threads of work that I had been developing over the prior 15 or 20 years,” he said. “I proposed the study in a way that tied together several methodological and theoretical threads in the way I would want to do it ideally, and they supported it. It was a high-risk funding decision, and I am grateful to NARSAD for getting behind the study.”

Lenzenweger collaborated with Geoff McLachlan at the University of Queensland in Australia and Donald B. Rubin of Harvard University, both leaders in the application of new statistical methods to health-related problems. They applied a technique called finite mixture modeling to separate the research subjects into the two groups.

For years, debate in the field has centered on whether risk for schizophrenia was graded or more binary in nature. Lenzenweger and his colleagues showed that people could be divided into two groups, those at risk and those not at risk.

In the new study, the smaller of the two groups contained individuals who displayed dilute forms of schizophrenia-like symptoms even though they had never had the illness. Study of these people revealed actual schizophrenia in their biological family members, but not other psychiatric illnesses.

“What was very exciting for us is that this method allows you to assign a probability to every person in the sample with respect to likelihood of risk for schizophrenia liability,” Lenzenweger said. “By doing this, one can generate very precise estimates of where individuals fall on the risk dimension.”

Although the risk predictions can be made now, they are not yet ready for clinical applications by practicing therapists. Lenzenweger envisions using the new model as a way to choose schizotypic individuals – people who are at risk for the illness but do not have it – for more intense genomic study. That sort of research may help scientists pinpoint the gene or genes that cause schizophrenia.

“The study of schizotypic individuals offers a unique perspective on what might cause the illness,” Lenzenweger explained. “It provides a clearer window on the likely underpinnings of the illness prior to the devastating impact of the clinical illness.