The end of an era? 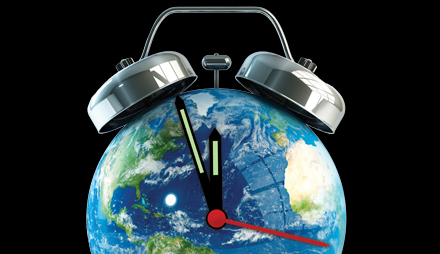 At Binghamton University’s Fernand Braudel Center for the Study of Economies, Historical Systems, and Civilizations, scholars view the world through a unique lens.

• Where others see individual, independent nations or, say, clusters of countries making up an economic region such as the Third World, these scholars see one world-system.

• Where others take note of what appear to be dramatic developments in history, for instance the Industrial Revolution or the Space Age, these scholars view such change as rooted in a set of fundamental structures that have remained recognizable for 500 years.

• And where others consider recent recessions to be detours on a path toward continued worldwide economic growth, these scholars observe a crisis that may mean the end of historical capitalism as we know it.

This perspective, called world-systems analysis, was advanced in the 1970s by sociologist Immanuel Wallerstein, founder of the Fernand Braudel Center, and is today the subject of intense debate around the globe.

“An important aspect of what we do is that we see the world on the largest scale not as a collection of states, but rather as a single and historically unique system,” says Richard E. Lee, professor of sociology and director of the Fernand Braudel Center.  “It makes it both easier to understand the world and more difficult to study it.”

A core principle of this perspective, Lee explains, is that what we see and experience in the world is formed by our relationships. “World-systems analysis,” he notes, “is just a special case of the very largest of these sets of possible relationships.”

Take, for instance, married people.  “You became a different person when you got married,” he says. “Not because you’re different, but because the relationship, manifested in legal and social constraints, remade or ‘restructured’ you. Relationships are what make us who we are.”

A port city offers another example of this way of thinking. A port must have a deep harbor, protected in such a way that wind doesn’t batter the ships. “But if you don’t have ocean-going trade, you’re not going to have a port city,” Lee says.  “The harbor and the buildings could all look the same, but the day that there’s no trade, it’s not a port city.”

World-systems analysis deploys this way of thinking by focusing on long-term processes rather than short-term events. Its proponents argue that the current world-system arose during the 16th century, in part because they see the structures of geopolitics, economics and knowledge as fundamentally similar during the past five centuries. “Although I may disagree with him on many counts, I do feel I live in the same ‘world’ as Descartes,” Lee says. “He is a man of my own time, whereas the philosophers 200 or 300 years earlier inhabit a different social universe.”

Seeing history with this long-range vision reveals how unsettled life is at the outset of the 21st century. Indeed, Lee says, the world appears to be going through a shock equivalent to the one last experienced 500 years ago. “The globalization perspective that everybody hears so much about suggests that there is a way to a future that would look much like the world of today, that things are bad now but they could get better,” he says. “Alternatively, we see enormous, probably insurmountable, difficulties in restructuring the political economy of the world to keep it growing over the long term in the same way it has for the last five centuries.”

The kind of accumulation and concentration of wealth that was possible in the past can’t continue, in part because there are no new pools of low-cost labor outside the system to be brought in at the bottom of the international wage hierarchy. Everyone’s in already. And as the poorest classes clamor for a bigger share, there’s no way to put off responding to those claims.

Charles Lemert, a senior fellow with Yale University’s Center for Com- parative Research, says this insight sets world-systems analysis apart.  “There is no other social scientific tradition — or figure for that matter, besides Wallerstein and the world-system group — that understood, almost immediately, that the world was changing in dramatic ways right around 1990,” Lemert says. “Now it’s almost commonplace.” Arriving at that conclusion before the rise of the Internet and global finance as it’s now known was the result of a rigorous approach to studying the previous half-millennium, he says.

“The system in which we live is the only system in all of world history that has expanded to cover the whole world, and that’s why we say it is a singular system,” Lee notes. “If you see one of the key driving forces of that system as expansion, then it follows that when there’s no place left to go, you’re going to have a crisis, one that leads to the demise of the system itself.” Fundamental ruptures are happening in every arena that world-systems analysis addresses, including the structures of knowledge as well as geopolitics and economics, he says.

There is a fundamental structure shaping knowledge production during the past 500 years, an epistemological division based on the separation between “facts” and “values.” Today this separation has become untenable, both in theory and in practice. If this seems esoteric, think just for a minute about your computer or even your cell phone. “More important than any progress in communications that we have experienced over the past generation, as a result of advances in search-engine technology, every thing on the Internet is equidistant from every other thing in cyberspace, as well as from every single individual user,” Lee says. “The scholar no longer inhabits a privileged space in the world of knowledge. No literature can remain proprietary; academics and non-academics alike can and do access literature, and intervene directly in debates, without regard for scholarly discipline or institutional status. The disciplines themselves, indeed all institutions and the ‘status’ they enjoy, are thus deprived of much of their gate-keeping function and thereby destabilized.”

This situation is the focus of Lee’s latest book, Knowledge Matters: The Structures of Knowledge and the Crisis of the Modern World-System, published earlier this year. Lemert sees the new book and Lee’s other scholarly work as filling in what many considered to be a gap in world-systems analysis: the role of culture. “In effect, what he has shown is that knowledge or the production of knowledge is both constituted by the world system that goes back to the 16th century and a constituent of it,” Lemert says. “That’s to say that knowledge isn’t just an afterthought. … He has shown how modern culture really is tied to the global economic system.”

What’s next, then, from the vantage point of world-systems analysis? Wallerstein wrote years ago of a period during which individuals would have an opportunity to influence the next historical system through their ethical and political choices. He calls this process of imagining and evaluating various courses of action “utopistics.” Lee and other scholars in world-systems analysis contend that we are living through this period now.

“We need to find new ways of thinking about the future, indeed, of ascertaining what scenarios for the future are actually possible,” Lee says. “We are all searching for an understanding of the reality of the world and are moral — and thus political — agents obliged to work for the making of a better world as we see it.”