Economist offers a cool model for a hot planet 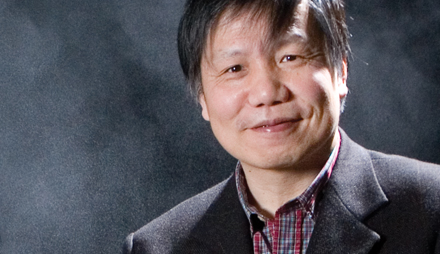 In his recent book, Strategic Bargaining and Cooperation in Greenhouse Gas Mitigations, Binghamton University’s Zili Yang suggests ways governments might realistically work together to reduce carbon dioxide emissions. He also makes a case for curbing the use of fossil fuels — whether they contribute to climate change or not.

“If global warming is factually true — and I’m not making a scientific judgment here — then a rational government should do something,” said Yang, a professor of economics. “And suppose, hypothetically, that climate change is not true. You can burn fossil fuels all you like. Sooner or later you will still run into a situation that requires you to adopt a new technology. If we use climate change as an excuse for arriving sooner at alternative energy, it does not hurt anybody.”

Yang uses game theory to create a cost-benefit analysis of actions countries could take to curb global warming. His work is not political, but rather applies modeling and logic to the issue. “Advocates make the argument, sometimes without justification, and are quite emotional,” he said. “My approach shows the incentive to do something.”

Yang believes that the economic issues associated with climate change must be considered in tandem with the natural sciences. Researchers who work from this multidisciplinary perspective have created “integrated assessment,” or IA, models, which take into account climatology, ecology, regional sciences and engineering as well as economic concerns.

There are several IA models, including an influential system that Yang had a role in developing while he was a graduate student at Yale University in the 1990s. That model, named RICE (the Regional Integrated Model of Climate and the Economy), is fairly simple and small, said Yang, who has also worked on much larger models.

Yang said he thinks a small model such as RICE is “beautiful,” though the algorithm and simulation scenarios might seem complex to non-experts. “A simple model can tell more stories,” he explained.

In his book, Yang takes the RICE model and brings it to bear on another hot area in economics: game theory. Game theory allows economists to examine the decision-making process in a scenario in which there are multiple people making decisions and those actions affect the other people.

Yang writes in Strategic Bargaining and Cooperation in Greenhouse Gas Mitigations that he observed integrated assessment and game theory as “twin peaks in economic research on climate change” unconnected by any bridge. He set out to change that, with a powerful computer and research funding from the Department of Energy.

Among the book’s most important conclusions is that climate agreements cannot require too much of industrialized nations or too little from the rest of the world. “With climate change, everybody contributes to the problem,” Yang said. “Everybody emits CO2. And the environmental damage will be felt by everybody. So in that situation, it is not efficient to have only some countries shoulder the burden.”

Yang’s research has attracted international attention. Yang spoke last summer at a climate-change conference in Venice and spent the fall 2009 semester on sabbatical at the Université Catholique de Louvain in Belgium.

“Zili Yang’s book provides a clear explanation of important analytical tools that are crucial to understanding and analyzing a country’s incentive to control climate change,” said Carlo Carraro, an environmental economist who is rector of the University of Venice and was an organizer of the conference there. He added that Yang’s model provided “crucial information” to policymakers who participated in the 2009 climate negotiations in Copenhagen.

Influencing such discussions is at the core of Yang’s ambitions for his work.

“Fifteen years from now, from a science point of view, everything about climate change should be clear,” he said. “But at that time, will human beings still be able to do something? It’ll probably be too late. Now people debate whether global warming is true. What economists can do is to suggest some kind of reasonable policy approach.”

Binghamton University economist Zili Yang was one of 21 climate-change experts invited by a Danish think-tank called the Copenhagen Consensus Center to submit papers that examine different solutions to global warming.