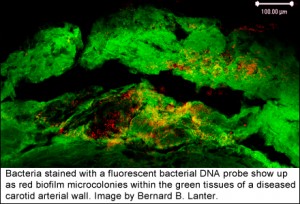 If you consistently experience high levels of stress, you may be stimulating bacteria that weaken your blood vessels, Binghamton University researchers have found.

The microbiologists discovered a link between stress hormones and bacteria that may explain how emotional shock or over-exertion can trigger heart attacks or strokes in vulnerable people. Researchers believe that this is how someone could literally be scared to death.

The research, published in mBio, the online open-access journal of the American Society for Microbiology, indicates that hormones released during stress could cause thin sheets of bacteria called biofilms to disperse.

If this happens in your body, biofilms within your arterial walls would be stimulated to release enzymes that might weaken the arterial wall and lead to plaque rupturing into the blood stream. Plaque rupture has long been known to be one of the leading causes of heart attack and stroke.

“Our hypothesis fits the observation that heart attack and stroke often occur following an event where elevated levels of catecholamine hormones are released into the blood and tissues, such as occurs during sudden emotional shock or stress, sudden exertion or over-exertion,” says David Davies, associate professor of biological sciences at Binghamton.

Biofilms, often referred to as slime, form when bacteria undergo a genetic change and then organize within a self-produced matrix of extracellular polymeric substance. Once they are protected within the biofilm, bacteria are harder to detect and to treat with antibiotics.

Davies and his colleagues grew different species of bacteria taken from diseased carotid arteries affected by atherosclerosis, the build-up of thick plaques within the walls of blood vessels. They found multiple bacterial species living as biofilms in the walls of every atherosclerotic carotid artery tested. Certain molecular signals can cause the biofilms to release enzymes that digest the scaffolding anchoring the bacteria in place.

“The release of iron into the blood as a result of increases in stress hormones is what causes the bacteria to release their hold on each other and the plaque,” says study co-author Karin Sauer, professor of biological sciences at Binghamton.

This research suggests that bacteria should be considered to be part of the overall pathology of atherosclerosis. The scientists suggest that management of bacteria within an arterial plaque lesion may be as important as managing cholesterol.

Davies believes this research might someday change the medical community’s view of many conditions. “We’re going one disease at a time and trying to demonstrate whether or not bacteria are involved,” he says. “In most diseases with the letters itis … it means inflammation, it means a biofilm infection.”