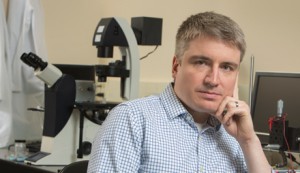 A Binghamton University engineer’s research may lead to a radical shift in manufacturing technology, one that could improve devices for energy production, healthcare and security.

Paul Chiarot, who recently received a five-year, $500,000 grant from the National Science Foundation’s most prestigious program for early-career researchers, aims to redefine 3D printing at a very fine scale.

His “electrospray” technique puts tiny particles into a solvent and applies them to a surface, creating electronics in a process not unlike an inkjet printer. “The normal way we make things is we put material everywhere and then etch away what we don’t want,” Chiarot says. “You might end up etching away 90 or even 95 percent of the material. If you’re printing, you can just put the material where you want it to be.”

Chiarot says his work will build on existing research strengths at Binghamton. “What we’re trying to do is to control at the smallest length scales what the structure of an individual layer looks like,” he says. “Right now there’s not a lot of control for that. But if you want to be able to get really nice functionality out of a 3D printed part, you want to be able to control what we call structure at the smallest possible length scales.”

That sort of control will enable engineers to produce parts with specific mechanical, electrical, thermal and optical properties, Chiarot notes. Magnetic particles lined up a certain way could be useful for data storage. A thin layer of gold can be both transparent and conductive, which can be useful in solar cell development. Glass particles could be useful for coatings with anti-fogging or anti-frosting properties, too. His group also plans to work with graphene and other carbon-based materials with interesting electrical and thermal properties.

“If you imagine these particles were billiard balls that we just threw together — which is the way we do it now — and you wanted to pass electric current through that, if it’s randomly packed, it won’t do a great job of it,” Chiarot says. “But if we do it the way you line up billiard balls — in an orderly fashion — that should help us get better conductivity, a more efficient device or maybe one that requires less material.”

Chiarot, who received bachelor’s, master’s and doctoral degrees from the University of Toronto, was a post-doctoral fellow at the University of Rochester before joining Binghamton’s faculty in 2011. His current research is a natural evolution of his earlier projects, including work on electrosprays with biological applications and with Kodak on printing technology.

The electrospray system relies on a high-voltage power supply and a small pump, which delivers the material to a nozzle that looks more like a syringe. When the particles come out in the spray, they have a high electric charge, which keeps them apart. It’s like a cloud of solvent with the particles disbursed through it. Chiarot says secondary electric fields can be used to reposition them “in flight.”

The system can cover centimeters of material at a time, and Chiarot envisions having rows of nozzles side by side to scale up the process for manufacturing.

Flat plastic and glass substrates are the “workhorses” of his lab, but Chiarot is also interested in taking a plastic part from a 3D printer and using electrospray techniques to apply coatings onto objects that aren’t so flat or so regular.

The goal of this research is to make electrospray printing a true manufacturing tool, to take it beyond one-centimeter-square samples produced in laboratories or small pieces created as curiosities. “We want to understand this principle fundamentally,” Chiarot says, “and then, using that knowledge, we want to develop a manufacturing technique that can lead to new jobs.”

Customized, small batches of products could be made at a lower cost with 3D printing in the future, he says. And picture the possibilities of a 3D printer somewhere like the International Space Station!

Chiarot knows his technique will be more attractive to manufacturers if there are relatively few special requirements for it. Generally, he says, electrospray can be applied at room temperature with low humidity and clean (but not sterile) conditions.

And he does anticipate a day in the not-too-distant future when manufacturing returns to the United States in a big way. It won’t look like it did 50 years ago, Chiarot cautions: “We need things, both small and large, not just cell phones, but jet engines and replacement parts, too. Manufacturing positions will come back, but it won’t be an assembly line.”

He says he’s excited about preparing his students for that kind of work. Open-source technology for 3D printing has the potential to accelerate innovation, Chiarot says, and students need to be ready to take advantage of the possibilities.

His NSF CAREER award includes an educational component, not only for doctoral students, but also to support undergraduates in the summer. Chiarot will work with a University of Toronto colleague to help staff a summer science, technology, engineering and math (STEM) program for kids there. Two Binghamton students will go this summer. Eventually, Binghamton will launch its own program and Toronto students will come to New York to support it.

“I worked in that program as an undergraduate,” he says. “It’s one of the best jobs you can imagine, and what it encompasses is amazing. It’s good for both young students and for the college students, and I think it will be great to have a program here as well.”