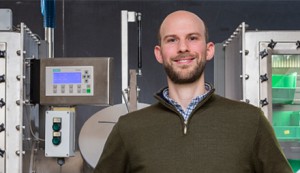 Jeffrey Mativetsky, assistant professor of physics, will receive more than $525,000 over five years for the work, which is to begin in July 2016. His research centers on the relationships between nanoscale structure and electrical function in organic materials for solar cells and electronics.

“One of the main things holding back the use of solar cells is the cost associated with them,” he says. “Organic solar cells provide a pathway toward low-cost, clean energy. Organic materials open new possibilities because they are lightweight and mechanically flexible, making it possible, for example, to integrate them into curved surfaces.”

Organic materials can also be processed near room temperature, Mativetsky notes, which is another factor that makes them attractive for flexible electronics.

Mativetsky, who blends principles of physics, chemistry and engineering in his research, says he’s motivated by a desire to work on systems that are relevant to society. He’d like to see solar cells integrated into disaster relief tents, for instance.

In his laboratory, students work at a 16-foot-long, nitrogen-filled glovebox as vacuum pumps vibrate and several solutions swirl in vials on a countertop stir plate. The glovebox maintains an environment a bit above atmospheric pressure, with less than 1 part per million of oxygen and humidity. Mativetsky has two atomic force microscopes, and his team uses additional equipment at Binghamton’s Analytical and Diagnostics Laboratory.

Mativetsky received seed funding through Binghamton’s Transdisciplinary Areas of Excellence program, which encourages work across multiple fields of inquiry and counts smart energy as a special area of interest. The preliminary results obtained by Mativetsky with fellow Binghamton physicist Joon Jang and chemist Alistair Lees provided a foundation for the NSF proposal. “We made it to the start line,” Mativetsky says. “Now we can do the research we set out to do.”

The core of that research will focus on molecule-based nanowires, filaments that are far, far thinner than a human hair and which often have special properties not found in materials at larger scales. Mativetsky is especially interested in how electric charge moves through these nanomaterials.

“We’re investigating the fundamentals of how nanoscale structuring affects charge photogeneration and charge transport,” he says.

Mativetsky believes these nanowires could improve organic solar cell performance and enable the manufacture of flexible solar cells that are thinner than a sheet of paper. Such solar cells might be less efficient than traditional ones made with silicon, he says, but they could produce more energy per gram of material.

Mativetsky, a native of Montreal who earned a doctorate in physics from McGill University in 2006, held post-doctoral fellowships at the Supramolecular Science and Engineering Institute in France and at Princeton University before joining Binghamton’s faculty in 2012.

He is already the recipient of another $300,000 NSF grant, which supports research into graphene oxide with potential applications in flexible electronics, energy storage, sensors, composite materials and biomedical engineering.