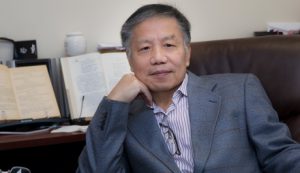 Climate change is our most complicated global pollution challenge, and cooperation is the key to solving it, according to a new book from a Binghamton University economist.

Zili Yang’s monograph, titled “The Environment and Externality: Theory, Algorithms and Applications,” was published in December by Cambridge University Press. 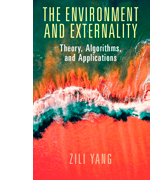 “If we don’t cooperate, if each individual strives for their own interest, collectively we create an economy with uncontrolled pollution,” says Yang, a professor of economics who joined Binghamton’s faculty in 2002. “If we cooperate, pollution can be controlled efficiently.”

Some ideas in the book are inspired by the RICE model (Regional Integrated Climate-Economy model) made famous by William Nordhaus. The 2018 Nobel laureate was Yang’s doctoral adviser at Yale University.

Think of the global economy as a cake to be shared among countries. It can be sliced in various ways. Right now, some slices are very large and others are quite thin. As economists think about ways to address climate change and reduce pollution, few if any countries are willing to go away from the table with a smaller piece of that cake.

Yang wants to find a way to divide the cake as fairly as possible. This cutting method is at the core of his work.

Yang begins the new book with a brief discussion of the concept of externality. When some people’s or countries’ welfares are affected by others’ activities without their explicit consent, then externality exists, he writes.

This is a core challenge of environmental economics. Why? Because all pollution hurts people. It may not harm you personally, but it’s hurting someone.

When people, countries or regions cooperate, they internalize this externality. The cake gets bigger, so to speak, but when it’s sliced some countries may still walk away with less than they had before.

His goal? Come up with a cutting method where every country gets a larger slice of the new, larger cake.

The method many economists employ basically says we sum up all agents or countries to form a social welfare function (so 15 countries equals 15). Countries are treated as equals, whether they’re small or large and whether the climate impacts they face are significant or minimal.

Yang doesn’t think that Fiji and the United States should be weighted equally, for example. He would say 15 countries equals n; if you’re more significantly affected, you should be expected to do more to fix the problem. Likewise, if a country is responsible for more emissions, it should be responsible for more mitigation costs.

His method recognizes that countries have to see how their circumstances will be improved. “You can’t force people to collaborate if it makes them worse off than when they weren’t cooperating,” he says.

Yang is also the author of “Strategic Bargaining and Cooperation in Greenhouse Gas Mitigations,” published in 2008 by MIT Press.

In his earlier work, Yang worked with the RICE model to “cut the cake” fairly. What he came up with took months of trial and error.

In the new monograph, he outlines an algorithm that makes an accurate cut on the first attempt, no trial and error required. He says the outcome and its elegance surprised him.

“I apply the theory and try to tell non-economists about it so it can be useful in policy,” Yang says. “My conclusion is unique.”

Other methods rely on a second round of “cake cutting” to ensure greater fairness. Yang attempts to build in that fairness to start, then executes just one round of cutting. Most models accommodate three regions; his allows many more.

Some of Yang’s thinking is also based on understandings of bargaining that come from the work of Nobel laureate John Nash. In the early 1950s, Nash articulated the strategic interactions possible between two or more decision makers.

How do we make sure two people (or countries, or regions) want to cooperate? Yang says you have to ensure that both are better off if they work together than if they do not.

This is one reason that Yang is somewhat critical of the Paris climate accords; he thinks they don’t call for enough cooperation. The climate targets are too rigid, and countries’ actions are too independent, he says.

Yang hopes the ideas in his new book will be put to practical use. He provides all the algorithms so others can check his work, and the publisher will make a paperback copy available for sale, which may make it appealing as a textbook.

Jon M. Conrad, professor of resource economics at Cornell University, says the book will become an essential text for graduate-level courses in environmental economics. “Yang does a masterful job of determining the optimal level of externality in both static and dynamic models under cooperative, non-cooperative and coalitional solutions,” he wrote in a review of the book.

Yang sees himself as a scientist out to challenge established ways of thinking.

“You have to be skeptical,” he notes. “I don’t necessarily accept established results without questioning them. You want to find something other people haven’t noticed.”