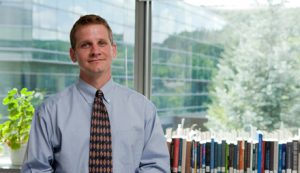 A Binghamton University historian argues in a new book that Americans are not divided when it comes to the teaching of evolution: The real disagreements relate to creationism.

“I don’t want to make anyone an atheist,” says Adam Laats, a professor in the Department of Teaching, Learning, and Educational Leadership at Binghamton. “No public school should have that as its goal, just like no public school should be trying to teach kids any religious idea, which would include creationism.” 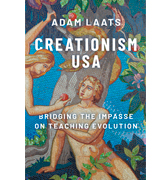 “Creationism is a private issue, and most Americans are some kind of creationists,” Laats says. “Most Americans have some sort of belief that, you know, all this didn’t just happen.”

A Gallup poll last year found that 40% of American adults believe God created humankind within the past 10,000 years. Another third of those polled said humans evolved over millions of years with God’s guidance. Just 22% said they thought humans evolved without any divine intervention.

“Most people who are creationists want their kids to learn evolution in schools,” Laats says. “It’s not a problem.”

The problem arises when people insist that their particular religious beliefs form part of the curriculum. Laats sees two key characteristics of what he terms “radical creationism.”

The other part is that radical creationists try to impose their beliefs into the public square. That includes public schools, but also questions such as: Should there be a prayer before a public meeting? Should people say Merry Christmas instead of Happy Holidays?

“The 2020 political moment, this crisis-fueled moment, has parallels in the history of creationism,” he says. “Understanding that history helps people understand how it is possible that some large number of Americans have confidence in these statements that seem, to me, patently false.”

Laats says there’s a pattern going back to the 1960s of aggressively dissident, competing science that today is expressed when someone labels facts as “fake news.” It’s not that someone like Scott Atlas, a physician and advisor to the White House coronavirus taskforce, hasn’t heard what epidemiologists are saying about the pandemic. “It’s that they dispute the legitimacy of the people with whom they disagree,” Laats says. “And we’re experiencing an acute outbreak at the very top. It’s very easy for people to dismiss what seem like they might be obvious in-your-face truths if you dismiss the source of those ideas.”

Although debates surrounding creationism have certain elements in common with controversies about climate science, Laats says it’s not a fair comparison.

“They get lumped together because they’re the two most prominent science denialism issues out there,” he says, “but they actually have both different histories and different trajectories. Climate change denialism is a lot more like tobacco science.”

Large, well-funded tobacco companies paid to have scientists go over peer-reviewed reports in the 1950s and ’60s and issue statements highlighting the limitations of findings about the dangers of smoking. Some people who cast doubt on climate science have similar financial motivations, Laats says.

“It’s a deliberate, well-funded, intentional, cynical attempt to spread ignorance, or at least doubt about established science,” he says.

The creationism debate isn’t rooted in money, for the most part.

For science educators, this has been an issue for 50 years. And for many of them, it feels outlandish, Laats says. “How can there be a debate? It’s not a debate. There’s science. And then there’s this other thing.”

He’s optimistic that American schools will continue to teach mainstream scientific principles related to evolution. “Even the most ardent anti-evolution groups, like Answers in Genesis, want their kids to learn evolution,” Laats says. “They just don’t trust people like me to teach it to their kids. They don’t want their kids to learn from people that they don’t trust, including secular, politically liberal, union-member types. So it’s not evolutionary theory anymore that they actually have a beef with their children learning, even though they think it’s incorrect.”

From a public policy perspective, that needs to be the end of the discussion, he says, even if some people view that as accommodating science deniers. “Let’s stop fighting,” he says. “Let’s agree to stop talking right there because the rest of it isn’t our business. The rest of it is culture war talk. The way that I think of it is that Americans don’t disagree about evolution. We just don’t like each other. Or maybe a more polite way to say it is we don’t trust each other.”

Laats is the author of three other books about the history of American education: Fundamentalist U: Keeping the Faith in American Higher Education; The Other School Reformers: Conservative Activism in American Education and Fundamentalism; and Education in the Scopes Era: God, Darwin, and the Roots of America’s Culture Wars. He earned a doctorate in U.S. history at the University of Wisconsin—Madison in 2007. His next project focuses on the first systematic attempt at urban school reform in the United States.