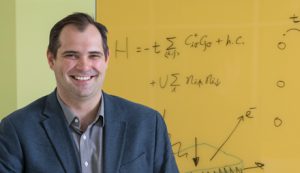 Binghamton University will acquire a sophisticated new X-ray tool useful in materials research and R&D for electronics. The $1.75M system — the third of its kind in the world and the first outside of Europe — will be funded by $1.23M from the National Science Foundation’s Major Research Instrumentation program and additional money from the campus.

“This opportunity is one I didn’t envision even five years ago,” says Louis Piper, associate professor of physics at Binghamton and the principal investigator for the grant, awarded last week. “We didn’t think it would be possible.”

The instrument, a HArd X-ray Photoelectron Spectroscopy system (or HAXPES), allows researchers to get detailed information about a device or material without taking it apart. 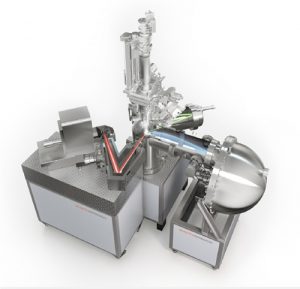 HAXPES relies on the photoelectric effect, one of the most important tools in condensed matter physics and in materials science (and the basis for Albert Einstein’s Nobel Prize). The machine shines light (in this case hard X-rays) into a material. The material accepts the energy and momentum and kicks out electrons. Conservation of energy and momentum allows researchers to determine the chemical and electronic structure of the material being studied.

This is the kind of energy you’d use for a chest X-ray at the hospital, Piper explains. And HAXPES will let him study a device like a battery in a way that leaves the battery intact, just like your doctor wouldn’t remove your rib cage for that chest X-ray.

“We can see what we previously couldn’t see,” Piper says.

That’s because other techniques are surface-senstitive. They’re good at scanning the outer layer of a device, but don’t offer a view of what’s inside. It would be like looking at a ham and cheese sandwich but only seeing the outermost crumbs on the bread. “It might not be a good representation of the material or what the material is like when it’s in contact with other materials,” Piper notes.

HAXPES requires a powerful source of X-rays and an extremely sensitive detector. The techniques associated with it have been used for about a decade, but previously were only possible with a synchrotron — a kind of particle accelerator that generates X-rays. At those facilities, visiting scientists typically conduct experiments over a period of hours and then leave.

HAXPES will provide synchrotron-comparable data in a laboratory setting, which makes it much more forgiving in terms of time and much more useful for private industry.

Compared to similar instruments, HAXPES offers more kinetic energy, which means excited electrons have a greater chance of escaping from deeper within the solid. That increases the tool’s sensitivity to the bulk of a material being examined. “Bulk” is a relative term in this case; HAXPES may go 60 nanometers deep into a material vs. 5 nanometers with other tools.

Still, at 60 nanometers, scientists will be able to access interfaces of real devices such as transistors. They’ll be able to measure energy levels and the chemical composition of buried interfaces without tearing them apart.

Piper, who is also the director of the Institute for Materials Research at Binghamton, says the new equipment dovetails with the campus’ industry-level capabilities. “We want to have unique tools that can act as a bridge between computational modeling and real-world applications,” he says.

The HAXPES, made by European company Scienta-Omicron, should be ready for use within two years at Binghamton’s Smart Energy R&D Building, part of the Innovative Technologies Complex.

The campus has a long history of industry partnerships and of creating multiuser laboratories to benefit academic and private R&D. The HAXPES should extend those collaborations in exciting ways, notes Bahgat Sammakia, vice president for research and director of S3IP, a New York State Center of Excellence focused on electronics packaging research. “Equipment like this adds to our unique capabilities at Binghamton and brings value to our relationships with major technology companies and startups alike,” Sammakia says. “Louis is a national leader in this area, and I am eager to see what he can accomplish with HAXPES on campus.”

The HAXPES is about the size of a pickup truck, and Piper notes that the Binghamton tool will have several upgrades. “I consider it the Cadillac of HAXPES instruments,” he says.

The instrument will have four key areas of focus:

In addition, researchers in the humanities may use the HAXPES’ small vacuum chamber to study pigments and clays. The tool will tie into Binghamton’s Materials Matter course, an interdisciplinary class that brings principles of science to life for humanities students and future scientists alike.

Piper sees the lab-based HAXPES enabling him and his colleagues to continue developing ways to describe chemical concepts to students from other disciplines.

He says he’s already seen firsthand how HAXPES could change materials research, as the technique allowed researchers to observe how electrons degrade and how that effects batteries’ performance.

“At Binghamton, we solve industry-relevant problems,” Piper says. “Photoemission has long been a powerful technique for materials studies, but has been largely been limited to sterile, perfect crystals. This instrument is very flexible and means we can measure real materials and devices even while they’re in operation. This tool means we’ll be able to make significant contributions in smart energy technologies.”