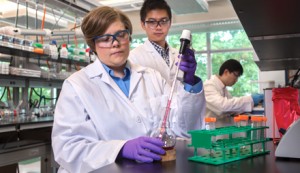 A Binghamton University researcher hopes to give doctors a more accurate way of determining a patient’s risk of heart attack or stroke.

Amber Doiron, assistant professor of bioengineering, says current methods of assessing atherosclerosis — commonly known as hardening of the arteries — are not terribly accurate. Some 30 percent of deaths worldwide can be attributed to the disease, which occurs when fat, cholesterol and other particles form hard structures called plaques in the walls of arteries.

“It’s really a guessing game right now,” she says. “Doctors use factors like blood pressure and cholesterol level to get an idea of a patient’s risk. Then they use plaque size as a general measure of whether a person has the disease. But there’s a fairly poor correlation between plaque size and heart attack or stroke.”

Doiron, who has an interest in molecular imaging as well as expertise in nanoscience, wants to help physicians do a better job of identifying which plaques are cause for concern.

She and a Temple University colleague recently received a two-year, $418,000 grant from the National Institute of Biomedical Imaging and Bioengineering to support this project. It’s a notable success in part because this was Doiron’s first National Institutes of Health grant proposal.

“A stroke or a heart attack doesn’t necessarily come when a plaque fully blocks the flow of blood through an artery,” Doiron explains. “What happens is the plaque ruptures and the gunk that underlies the plaque is exposed to blood and a clot forms. The clot builds quickly — on an hour time scale as opposed to over years — and the clot can grow there until it blocks flow, or it can dislodge and block flow somewhere else. Most heart attacks do not occur from a full blockage of plaque. It happens because the plaque bursts. Same thing with strokes. That’s why size isn’t necessarily indicative of how dangerous a plaque is.”

The discovery of a molecule or a cell type that indicated which plaques are safe and which ones are dangerous would be a huge breakthrough, Doiron says. She thinks oxidative stress may be such an indicator.

“Atherosclerosis is an incredibly complex disease that progresses over decades,” Doiron says. “It’s hard to tell who’s walking around with plaques that are stable, relatively safe, and who has plaques that may cause a heart attack tomorrow. For some patients, the first sign of trouble is a heart attack.”