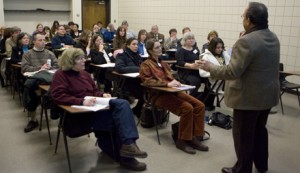 Binghamton faculty and researchers received insight into the National Science Foundation during an “NSF Day” held Jan. 15 on campus.

The daylong event, which featured presentations in the Lecture Hall touching on topics ranging from proposal preparation to the peer-review process, was the first such program the NSF offered in New York.

“The speakers from NSF provided valuable insights,” he said. “We hope that many Binghamton researchers will be able to apply the information they gathered the next time they seek NSF funding.”

Michael Frame, director of federal relations, coordinated the workshop with Lisa Gilroy, director of sponsored programs, and officials from NSF. He said the day, which drew nearly 400 participants from colleges and universities across New York, exceeded even the organizers’ expectations.

“The event had the largest registration of any regional seminar NSF has ever presented,” he said. “We’re thrilled that so many researchers were able to benefit from the sessions and from the one-on-one interactions with NSF staff members.”

George M. Wilson, legislative specialist in the Office of Legislative and Public Affairs at NSF, provided participants with an overview of the agency whose vision is “advancing discovery, innovation and education beyond the frontiers of current knowledge, and empowering future generations in science and engineering.”
Wilson emphasized the importance of a proposal’s ability to educate the next generation.

“We ask that when you give us a proposal, you explain how your research will be used in developing the human and physical infrastructure for the next generation of researchers,” he said. “Concentrate on how that (research) can affect the nation as a whole.”

“The odds of getting funded can be somewhat daunting,” he said. “The answer to that is persistence.”
Wilson urged participants to learn from the review of a rejected proposal and try again. The success rate of a proposal rises from 15 percent in the first submission to 50 percent in the second attempt to 75 percent by the third submission, he said.

There is a “steep learning curve” in proposal writing, Wilson said, and becoming an NSF reviewer can help. The 248,000 reviews last year were made by 45,000 reviewers.

To become an NSF reviewer, send an e-mail to the NSF program officer of the program that fits your expertise. To find the appropriate program officer, go to www.nsf.gov.