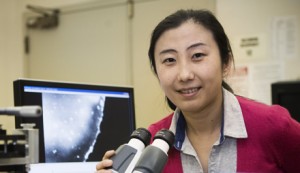 Ying Sun, an assistant professor of mechanical engineering at Binghamton, has received a grant from the National Science Foundation’s most prestigious program for young faculty.

Sun’s work, which could lead to improvements in environmentally friendly electronics manufacturing as well as advances in solar power, has been recognized with a $400,000, five-year grant from the NSF’s Faculty Early Career Development (CAREER) Program. Just 15 percent of applicants received grants.

Sun focuses on the thermal and fluid phenomena associated with printed electronics. She hopes to improve electronics created with machines not unlike the ink jet printers found in many home offices.

Sun and her team use microscopes and cameras to observe the way drops of ink behave when they hit and spread on a surface such as glass or plastic film. The droplets are incredibly small, perhaps 50 microns in diameter, which is about half the width of a single human hair.

But Sun cites a much more mundane liquid when she talks about her work. “You imagine coffee is a solution, but actually it’s a suspension of very tiny particles,” she said. “Ink is a colloidal suspension, too. If you spill some coffee on a tissue, you will see a ring. There will be more deposition – more little particles – at the edge of the ring than in the middle. You have the evaporation of the water and the flow of those particles. Those are phenomena that I’m working on with ink.”

Since arriving in Binghamton less than three years ago, Sun has found that her research interests dovetail with ongoing projects at the Small Scale Systems Integration and Packaging Center (S3IP) and its Center for Advanced Microelectronics Manufacturing.

In fact, she has already received two research grants through the CAMM, in 2007-08 and 2008-09. “Those two grants gave me the opportunity to get involved in research activities on campus and work with engineers and facilities at Endicott Interconnect,” she said.

She has also collaborated with Howard Wang and Timothy Singler, both associate professors of mechanical engineering at Binghamton. Firms such as Corning, Texas Instruments and General Electric have expressed interest in her work.

Bruce Murray, a professor of mechanical engineering at Binghamton and mentor to Sun, said he has been impressed with her broadening skill set. She has become progressively more involved in experimental research, although she has a computational research background.

“Since coming to Binghamton, she has branched out and gotten involved in the different research centers here,” he said. “She’s making contributions and being very successful.”

That’s a responsibility Sun has eagerly accepted. She said she hopes to offer her students the sort of encouragement her parents provided when she was growing up in Beijing. “My parents are college professors,” she said. “In our culture, we were pushed to perform, to do the best we can.”

Sun’s now working with several female undergraduates on a virtual thermal and fluid laboratory, complete with video clips designed to spark an interest in the subject among high school students and college freshmen.

Her initial research focus has been on improving the ink jet-printing process for electronic devices such as flexible displays, but her work has numerous applications. She recently began talking with campus colleagues to explore printable solar cells and also envisions some possibilities for pharmaceutical manufacturing.

Printed electronics require very fine lines of ink with good definition at the edges, a high resolution and a uniform quantity of particles throughout. “I’m interested in how to understand that process and how to make it most efficient,” Sun said.

She has devised a way to observe the inkjet printing process in situ, or as it happens. She makes the particles of ink fluorescent, which enables her to observe them drop by drop with the microscope in her lab or a scanning electron microscope or atomic force microscope in the Analytical and Diagnostics Laboratory at the Innovative Technologies Complex.

“Our niche is we look at the process,” Sun said. “By looking at it in situ, we can try to understand the effects and the dynamics of those particles. We also use simulations to optimize the process.”

She is experimenting with plasma treatment as well as laser treatment to achieve sharper lines and increase the adhesion of an ink onto various surfaces.

The process is quite different from the traditional mechanisms for producing electronics. Generally, a surface is coated with a metal such as copper and then chemicals are used to etch, or remove, the metal that’s not needed. “With printed electronics, everything’s additive,” Sun said. “You don’t really etch anything. It’s environmentally friendly and you’re not wasting a lot of material. It’s very efficient.”