What looks reveal about neighborhood safety 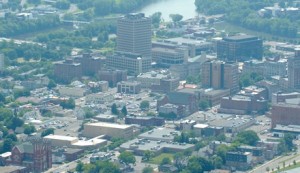 You’re in an unfamiliar neighborhood. After giving streets and buildings you’ve never seen before a quick once-over, you make a snap decision about whether you’re safe. And chances are, that first “gut” call is the right one, Binghamton University researchers Dan O’Brien and David Sloan Wilson say.

In a recent series of studies conducted in Binghamton, N.Y., evolutionary biologists O’Brien and Wilson set out to test whether we have the capacity to judge urban neighborhood safety just by looking at physical structures. It turns out that we do, they write in the current issue of Journal of Personality and Social Psychology.

Through a combination of interrelated studies, O’Brien and Wilson showed participants a selection of photos taken in unfamiliar neighborhoods and then asked them to rate what they perceived the social quality in each of these environments might be.  In one study, participants were asked to determine if the residents living in the photographed areas were friendly with each other, shared favors and, most important, would be able to organize against crime or other threats. The responses were then compared to the results of a previous study O’Brien and Wilson conducted in which participants were asked to rate their own neighborhoods on a similar scale. Interestingly enough, the ratings between the two study groups proved similar. If an outsider thought a neighborhood looked safe, people living in it were able to verify it. By demonstrating the agreement between the two groups, O’Brien and Wilson had clear evidence that the “naïve” participants were in fact accurate when comparing to the measures of community and safety drawn from the neighborhood survey.

The question remained, however: What information in the streets and buildings of a neighborhood help an individual to come to these conclusions?

“Sociologists have long understood that signs of ‘disorder’ — loose garbage and broken windows — indicate a weak community that is vulnerable to criminal behavior,” O’Brien said. “And further investigation verified that participants were indeed equating unkempt lawns, peeling paint and unchecked litter with a lack of safety. We already know that most of us use available cues to judge people we’ve just met. Why not neighborhoods? The information is there, the question was just whether we pay attention to it or not.”

It appears that we do, and O’Brien and Wilson have termed this ability “community perception.” Our internal “neighborhood antenna” homes in on certain elements in ways that we’re sometimes not even fully aware of.

But there’s more to it than just making a mental note; our antenna can influence whether we stick around in a particular neighborhood and how we behave while we’re there. According to O’Brien and Wilson, studies of cities have shown that the maintenance of physical structures is directly correlated to the strength of ties between neighbors, which in turn is responsible for the crime level. Taking the theory one step further, O’Brien and Wilson hypothesized that our willingness to establish those ties revolves around whether we think our neighbors merit our trust and cooperation.

To test the effectiveness of these ties, they had participants play a game involving money with residents who they were told were from the pictured neighborhoods. When viewing disorderly scenes, participants were less likely to trust their partners and tended to play selfishly. From this reaction, O’Brien and Wilson were able to make an interesting observation: Disorderly neighborhoods tend to discourage cooperative behavior because they signal to observers that they need to be distrusting. So it would stand to reason that the more effective neighbors are at developing a culture of prosocial behavior, the more cohesive and cooperative — and ultimately, the safer and more physically attractive — the entire neighborhood becomes.

However, O’Brien and Wilson also discovered that even our gut instinct needs a reality check. Again looking at the photos, participants were called upon to rate what they thought the self-esteem levels might be of adolescents living in the various neighborhoods. Overwhelmingly, adolescents living in disorderly neighborhoods were assumed to have low levels of self-esteem and as such, were considered to be untrustworthy and more likely to get up to mischief. But when the participants’ responses were compared to the data from the previously administered survey from residents in their own neighborhoods, these opinions were not particularly accurate.

“There are many things occurring in a neighborhood that may or may not be related to each other,” O’Brien says. “But people create only one snap judgment that encompasses all of these things. Buildings and streets can provide reliable information about a community ability to govern itself, but not necessarily about how local residents live their own lives. And that’s where our perceptions can go awry. In situations where you’re trying to navigate an unfamiliar neighborhood, you don’t have time for ambiguities — it’s either all good or all bad. But at the same time, when it all gets lumped together, you get inaccuracies.”

The question O’Brien and Wilson are now considering is that since we know people are attentive to disorderliness, what can communities do to motivate their residents to clean up their streets, houses and lawns? O’Brien has some thoughts and is already working on a related project with the City of Boston, whose residents can use an iPhone or Droid app to report graffiti, code violations and other environmental concerns directly to the mayor’s hotline. In the coming months, O’Brien will be working with other researchers to experiment with new features on the app that might energize people’s desire to clean up their own neighborhood.

The Binghamton study and a range of other research activities under way in the region are contributing to the Binghamton Neighborhood Project (BNP), a collaborative effort of Binghamton University faculty and community partners that is designed to provide science-based solutions to real-world challenges in the area.

Like this article? Please share!
communitiesdavid sloan wilson
0
Engineer calls for new thinking about ethics
Breakthrough may have implications for superconductors