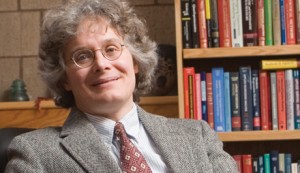 About 1 in 10 people have the potential to develop schizophrenia, but only 1 in 100 actually end up with this devastating illness. The challenge is in knowing why some do and some don’t.

Mark F. Lenzenweger, a distinguished professor of clinical science, neuroscience and cognitive psychology at Binghamton University, says he has a good response to this troubling question and ideas about how to find those answers.

In his latest book, Schizotypy and Schizophrenia: The View from Experimental Psychopathology (Guilford Press, 2010), Lenzenweger explores lessons he has learned in the psychological science laboratory while probing the broader questions of how to think about and conduct psychopathology research.

“The liability for schizophrenia is relatively prevalent and common in our population,” Lenzenweger says. “Therefore, understanding why someone goes on to develop the illness is a high-priority research question. I firmly believe that those who harbor this liability but do not develop the full-blown illness of schizophrenia may hold the key to this puzzle. 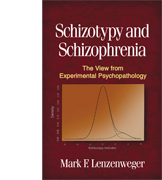 “Since this is an ongoing challenge for our society, training the next generation in how to think about and conduct psychopathology research is just as vital. So what I’ve tried to do is combine both of those elements in a way that I hope will appeal to both the experienced researcher and those just starting out.”

The book traces Lenzenweger’s intense efforts to find answers using laboratory and statistical procedures by examining a host of related conceptual issues, data analysis strategies and methodical viewpoints that he has found helpful in his more than 25 years of laboratory study. Lenzenweger, who relies on clinical anecdotes and research recollections, hopes that readers will develop an appreciation for issues related to the causes of schizophrenia and related disorders.

“Schizophrenia is perhaps the costliest form of mental illness,” Lenzenweger says. “In addition, it has a strong genetic component; about 80 percent of what determines schizophrenia is related to genetic influences. All people with schizophrenia share a personality organization known as schizotypy. And the person who carries shizotypy is known as a schizotype. Yet not all schizotypes are schizophrenic. In fact, the vast majority of schizotypes do not go on to develop the illness. So it stands to reason that the study of schizotypic individuals offers a unique perspective on what might cause the illness.”

Lenzenweger says advancing our understanding of the causes and development of schizophrenia will be difficult.

“There will be no simple solution or discovery that remedies the entire problem,” he says. “But I hope that my book will chart the course for the field as it stands currently and show the way forward for the generation to come.”

Lenzenweger, who joined Binghamton’s faculty in 2001, is an internationally renowned researcher in the areas of schizophrenia and personality disorder.

He has directed the landmark Longitudinal Study of Personality Disorder, funded by the National Institute of Mental Health. Lenzenweger, a prolific writer, is also an adjunct professor at the Weill College of Medicine at Cornell University in New York City. He began his academic career at Cornell, where he was a member of the tenured faculty, and he moved on to a professorial post at Harvard. He holds doctoral and master’s degrees from Yeshiva University as well as a bachelor’s degree in psychology from Cornell University.

In 2006, Lenzenweger received the State University of New York Award for Research and Scholarship as well as the Chancellor’s Award for Excellence in Scholarship and Creative Activities. A year later, he was promoted to distinguished professor, a tenured University ranking that is conferred for consistently extraordinary accomplishment.