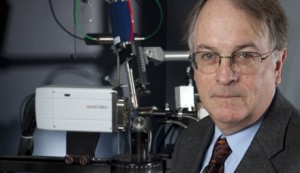 Binghamton University and M. Stanley Whittingham are at the forefront of the movement seeking new ways to design the next generation of lithium-ion batteries.

The University is an associate director of the Northeastern Chemical Energy Storage Center (NECESC), an energy frontier research center that received designation and funding from the Department of Energy during the summer.

Whittingham, professor and director of the University’s Materials Science and Engineering program, wrote the proposal to the Department of Energy with Clare Grey of Stony Brook University and Glenn Amatucci of Rutgers University. The five-year, $17 million NECESC was one of 46 research centers established by the DOE and will operate out of Stony Brook.

“(The centers) are basic energy projects to understand the real barriers that one has to overcome to solve our energy problems,” Whittingham said. The role of the NECESC is “to overcome scientific hurdles to making lithium-ion batteries better. How do we store more energy? How do we get the chemistry of the reactions to go better?”

The team also features experts from schools such as MIT, Michigan and University of California-San Diego. Rutgers is the second associate director and Brookhaven National Laboratory on Long Island and the Lawrence Berkeley National Laboratory in California are involved, as well. But Whittingham’s experience is unsurpassed on the team, as he is credited with developing the lithium-ion battery while working with Exxon in the 1970s. The lithium-ion battery is now used on devices such as cell phones, laptops and iPods.

The fact that the team members have worked together before was crucial for receiving the funding, Whittingham said.

“I think one of the reasons we were successful was that lots of people with this project have collaborated and have gotten publications out together,” he said. “We’ve shown by example that we can collaborate.”

The NECESC had its kickoff meeting last month at Stony Brook. Whittingham, who is one of four team leaders, and others will soon meet again in France and Austria during international science conferences to discuss their progress.

The idea for the energy frontier research centers came out of a Department of Energy conference held in 2007 in Washington, D.C., about electrical energy storage. Whittingham chaired part of the workshop.

“There was a basic recognition on the federal level that there were hurdles we needed to overcome in a wide range of areas,” he said. “You’ve got to fund basic science at a high level to overcome these hurdles. The other side to come out of (the workshop) is that there’s no technology in the United States. It’s all in Asia. So you also have to fund manufacturing capabilities in the U.S.”

Two years after the workshop, the government recognized the importance of alternative energy by naming the 46 centers. Whittingham attributed the quick turnaround to President Obama.

“They will allow you to drive 40 miles on the battery itself,” he said. “So most of us will commute to and from work without using any gas. You’d go home in the evening and plug it in a socket. You wouldn’t use gas except for a long trip.”

Whittingham predicted that PHEVs will be seen late in 2010, maybe a little later. The work of the NECESC over the next three to five years will be key, he said.

“The two big issues now are is it safe enough and the lifetime cost,” he said. “We’re going to remove all of the costly elements from the present system and replace them with lower-cost materials. Equally critical is that we find low-cost manufacturing methods for making these materials.”

Whittingham, who discussed electrical energy storage at the Financial Times international energy conference in London earlier this year, is pleased to see battery research at the center of energy discussions after it was de-emphasized at the beginning of the decade.

“We’re riding a hot wave at the moment,” he said. “My students are clearly happy, because there are tons of jobs out there. This is a good field to be in right now.

“It’s exciting. The country has finally realized that we’ve got to do something. We’ve been in the doldrums too long.”