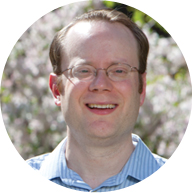 While researching his first book on Buddhism, Charles Goodman was translating passages from the Buddhist scholar Shantideva. As he looked at the passages and compared to them to the only English translation available, he realized the translation lacked many of the ideas in the original text.

Goodman decided to update the translation for Shantideva’s “Siksasamuccaya” (“Training Anthology”), allowing Buddhists and scholars to have a better understanding of many important components of one of the world’s largest religions.

“With more and more Americans becoming interested in Buddhism, it is important to have authentic texts available,” Goodman says. “And with trade so important to our economy, understanding Asian cultures is more important than it has ever been.”

Goodman, an associate professor of philosophy and Asian and Asian American studies, came to Binghamton in 2003 after earning his doctorate from the University of Michigan. He is the author of the book “Consequences of Compassion: An Interpretation and Defense of Buddhist Ethics.”

His work translating the Shantideva has taken him twice to the Central University for Tibetan Studies in India, where in 2010 he spent about three months working mainly with the Venerable Tashi Tsering on the revised translation. Goodman’s relationships with Tibetan scholars make his work unique; the authors of the original translation, published in the 1920s, did not have such access.

Once Goodman’s book is completed in 2013, it will serve many purposes. Scholars will be able to see how Buddhism developed historically, as Shantideva’s work quotes texts that don’t exist in other forms, or the original Sanskrit has been lost. Goodman says he hopes the book will help Buddhists live a more kind and compassionate life and help people understand Buddhist culture’s influence on many Asian countries.

“When we translate the text correctly,” Goodman says, “we see that Shantideva was a more sophisticated ethical and philosophical theorist than we gave him credit for.”