Research could lead to light-weight aircraft 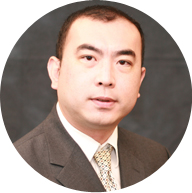 A Binghamton University faculty member with an interest in nanoscience is among just 43 researchers nationwide chosen for the Air Force’s Young Investigator Research Program this year.

Changhong Ke’s work focuses on low-density, high-strength materials that could allow the Air Force to reduce the weight of vehicles such as fighter planes and spacecraft.

The program supports scientists and engineers who received a Ph.D. in the last five years and show exceptional ability and promise for conducting basic research. Grants of $120,000 annually for three years support creative basic research, enhance early career development and increase opportunities for the researchers to recognize the Air Force mission and related challenges in science and engineering.

Competition for the awards is stiff, with fewer than 20 percent of applicants receiving funding.

Ke, who joined the mechanical engineering department at Binghamton in 2007, received his doctorate from Northwestern University and had a post-doctoral fellowship at Duke University. He did his undergraduate work at Beijing Institute of Technology.

His studies focus on two materials, both of which have hollow, tube-like structures. One is made of carbon and the other is made of boron nitride, which is far less common.

Both are called nanotubes because their wall thickness and diameter can be measured in nanometers. Several thousand of these tubes put together would still be thinner than a single strand of your hair.

“They are both light and strong,” Ke said. “They have similar mechanical properties but different electrical properties. The carbon nanotubes can be conductors or semiconductors, while the boron nitride tubes are insulators. Both dissipate heat quickly, which is good for aerospace applications.”

For practical purposes, these tiny tubes would be wound together like ropes or be mixed into polymers, such as epoxy, to form composites. The resulting fibers are quite strong, but it’s not well understood how they’ll respond to various kinds of stress, Ke said. How strong is the rope? How strong are the individual structures? What happens when the ropes get thick enough that some fibers are encased by other fibers? What role does the binding interface among the tubes play in the strength of the bundle? And how does the interface between these high-strength fibers and polymers contribute to their reinforcing effects in the polymer composites?

Ke plans to investigate not only how carbon nanotubes and boron nitride nanotubes perform individually, but also what happens when small bundles are made from the two nanomaterials together. What happens at the places where the two touch? How strong is the interface between them? 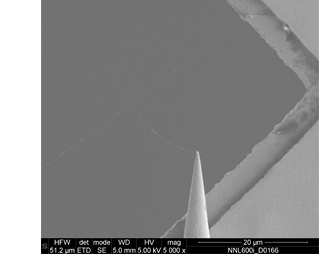 Ke relies on unique instrumentation to perform these tests, including a special tool he installed in his laboratory on an advanced electron microscope. This “finger” has a very sharp tip that allows him to grab one nanotube at a time and move it precisely.

“Our first step is to measure the interfacial strength, and then we’ll focus on how to improve the strength of these bundles and polymer composites,” he said. “That will help in the design and manufacture of new materials.”