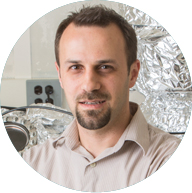 More than a quarter of a century after its discovery, high-temperature superconductivity still challenges condensed matter physicists. For Binghamton’s Pegor Aynajian, the key to unlocking the mystery — which will ultimately lead to widespread, high-efficiency “green” power transmission — lies in understanding a newly discovered electronic phenomenon that is entangled with the superconductor: It’s either a pull toward order or a push toward freedom.

Using intense X-rays, Aynajian and his collaborators observed these patterns within the bulk of the superconductor. This breakthrough led to the 2014 publication of a paper titled “Ubiquitous Interplay between Charge Ordering and High-Temperature Superconductivity in Cuprates” in Science.

“Pegor spent years honing the technology to catch electrons in the act of forming these so-called ‘crystals’ that move in unison,” says Ali Yazdani, a Princeton professor who supervised Aynajian’s work there. “We don’t yet have a clear understanding why these materials superconduct, but we think it comes from the strong interactions between electrons. That’s what Pegor is trying to sort out, and why this work is so important. He’s able to synthesize many different ideas, and … he’s already made a big impact in the field.”

Aynajian received his bachelor’s degree from Lebanese University in Beirut and his doctorate from the University of Stuttgart in conjunction with the Max Planck Institute for Solid State Research in Germany.

Since arriving at Binghamton in 2013, Aynajian has been setting up a below-ground, ultra-quiet lab, with undergraduate and graduate students constructing Binghamton’s own scanning tunneling microscope. Two semesters later, their STM has passed its first tests of visualizing carbon atoms on graphite and electron waves on copper. This gives sophomores their first view of the quantum world.

“It’s like exploring a new world, like landing on the moon for the first time,” says Aynajian, an assistant professor of physics. “But instead of the cosmos, you’re going to the microcosmos, to the quantum world. You land on a new sample, and for the first time you’re able to see what electrons actually do on this particular material, which makes it so special. That’s a tremendous excitement, but the real reward doesn’t come until you can explain what’s happening.”

Like this article? Please share!
physicssuperconductor
1
Exploring the value of 'Energy Star' homes
For this scholar, trash is treasure