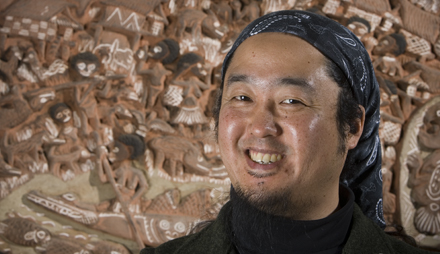 Funded by a $1.5 million grant from the National Institutes of Health (NIH), scientists at Binghamton University hope to understand how the malaria parasite Plasmodium falciparum evolved resistance to the once-effective medication chloroquine.

“Malaria is responsible for 1-3 million deaths a year, most of whom are children under 5 in sub-Saharan Africa,” said J. Koji Lum, associate professor of anthropology and biological sciences, principal investigator for the grant. “This is equivalent to the death toll from the attacks of 9/11 every eight to 24 hours.”

Lum and Ralph Garruto, professor of biomedical anthropology and a co-investigator on the grant, together have about 11,000 archived human blood samples from malarious regions of the Pacific collected from the 1950s to the present. The samples will be analyzed and researchers will document the accumulation of genetic changes that resulted in chloroquine’s treatment failure in the Pacific.

Malaria is relatively easy to eliminate in places that have a good health-care infrastructure. In the developing world, particularly in the tropics, the disease is treated primarily through chemotherapy, Lum said.

The problem is that parasites develop resistance to the drugs over time. This study will help scientists understand how malaria parasites evolved resistance to chloroquine. They also hope to learn lessons that may be relevant to current treatments and their interactions with the disease. Ultimately, a better understanding of past episodes of drug resistance evolution will help doctors get the maximum possible impact from newer drugs.

Other studies have had to rely on theoretical modeling of resistant parasites to infer how they evolved. Lum and Garruto expect to be able to directly observe the accumulation of the nine mutations in the transporter gene that confer resistance to chloroquine. They’ll study parasites collected during the past 50 years and stored in the freezers of the NIH-BU Biomedical Anthropology archive.

“This funding will allow us to do a little bit of time traveling,” Lum said.

Lum considers malaria the most important infectious disease in human history. It continues to exact a devastating toll, in part because the resulting loss of education, work and young lives creates a cycle that makes it nearly impossible for nations to rise from poverty.

To eliminate malaria, countries must treat their entire populations, even asymptomatic adults. But there’s rarely enough money and medicine for developing nations to do that, Lum explained. Doctors focus their energies on the young, people who are clearly ill. Adults who have developed some level of immunity to malaria end up as reservoirs for parasites, continuing to spread the illness without ever feeling sick.