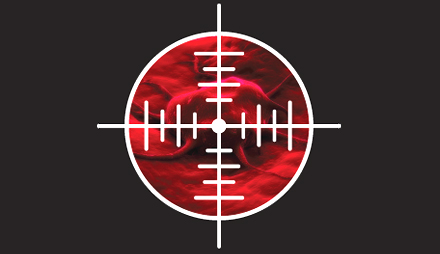 Many of the newest weapons in the war on cancer come in the form of targeted therapies. These drugs disrupt molecular processes in tumor cells and, as a result, keep the tumor from growing and spreading.

In order to develop targeted therapies, scientists need to understand the activities these drugs disturb. If a compound seems to shrink tumors, for example, they need to define what’s going on inside the cells to produce that result.

Binghamton University researchers are helping to advance this work, which may pave the way for better cancer treatments.

Susan Bane, professor of organic and biological chemistry, and Susannah Gal, associate professor of biological sciences, deploy a novel tool in their study of an enzyme called tubulin tyrosine ligase, or TTL. Many cancer cells contain less-than-normal levels of this substance.

Bane and Gal are conducting their project with funding from the National Institute of General Medical Sciences. Their work focuses on microtubules, structures that provide part of the scaffolding that gives a cell its structure and also help chromosomes line up correctly during mitosis, or cell division.

Microtubules are made of proteins called tubulin. During the course of a cell’s life, an enzyme called carboxypeptidase clips an amino acid called tyrosine off the end of some of these proteins. Later, TTL puts tyrosine back on the tubulin. No one knows the purpose of this cycle, Bane says. “But we do know that if you don’t have that enzyme, you’ll die.”

In certain cancer cells, the cycle of removing and reattaching tyrosine has fallen out of balance: Too many tubulins lack tyrosine. “Patients who have that characteristic in their tumor have a poor prognosis,” Bane says. Those tumors tend to grow more aggressively.

Hoping to learn more about the role of TTL in cancer, Bane and Gal are studying the removal and reattachment of tyrosine in live cells. Bane has developed a way to mark tubulin with a fluorescent molecule, allowing the researchers to observe those molecules in action under a fluorescent microscope. The technique will help them explore questions such as what conditions allow tyrosine to reattach to tubulin and what conditions keep that from happening. 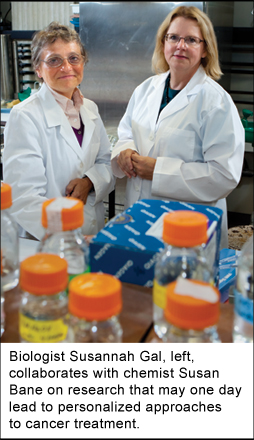 Marking tubulin isn’t easy. Most fluorescent markers will bond with any protein in a cell; they don’t distinguish between tubulin and other protein molecules. To mark just the tubulin, Bane and Gal essentially put a “hat” on that protein and then add a marker to that.

The hat is a special derivative of tyrosine that Bane created for the project. The researchers introduce this tyrosine derivative into a cell. They then add a fluorescent molecule that lights up when it bonds with the special tyrosine, but not with any other substance. In effect, they pin a glowing badge to the tyrosine hat.

TTL in the cell may pick up that hat and clamp it on the  “head”  of a tubulin molecule. Once the tubulin is wearing its luminous headgear, the researchers can tell it apart it from other objects in the cell and watch how it behaves.

Other methods exist for adding a fluorescent marker to a protein in a cell. The most common technique, using a fluorescent protein, presents certain disadvantages, says Dan Sackett, a biophysical cell biologist at the National Institute of Child Health and Human Development.

“The down side is that it’s a very large molecule, as big as the protein we’re trying to track,” says Sackett, who collaborates with Bane and Gal on their project. The marker may actually block the observer’s view of the protein under study.

The new technique, using a smaller molecule, provides an easier way to watch the behavior of microtubules as cells divide, Sackett says. “And since a lot of anti-cancer drugs target the mitotic spindle — the array of microtubules that moves chromosomes apart at mitosis — being able to observe that easily in multiple cell types is really an advantage.”

Cancer cells are often undergoing mitosis at a much faster rate than normal cells, making cell division a major target of cancer research.

Although Bane and Gal aren’t trying to develop a new cancer treatment, their efforts to learn the role of TTL in tumor growth could someday make it easier to choose a treatment for a specific case of the disease.

“Potentially, someone could send us their tumor sample, and we could put it in our labeling system and say,  ‘Yes, that has a problem with the TTL system, and therefore you should be more aggressive with it,’” Gal says.  “Or we could say,  ‘That’s probably OK, so you can treat it with normal chemotherapy.’”

While Bane and Gal focus on microtubules, Yulong Chen strives to understand the role that opioids might play in cancer therapies. His work hinges on the fact that an opioid — the key ingredient in painkillers such as morphine — can block a crucial reaction in certain cancer cells. 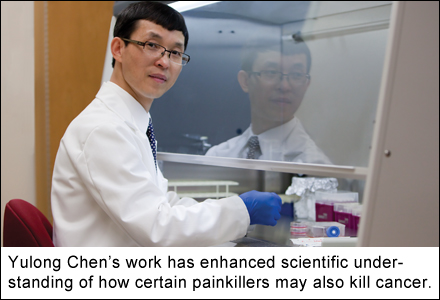 Chen, an assistant professor of biology at Binghamton, investigates how the transmission of chemical signals within cells turns genes on and off. Most of his research focuses on neurons, the cells that make up the nervous system. Some neurons have something interesting in common with certain cancer cells: They both carry molecules called opioid receptors that send signals into the cell when they touch opioid molecules.

In the nervous system, that signal blocks the sensation of pain. Unfortunately, the reaction also may cause side effects such as respiratory depression and constipation, and it may cause opiate addiction.

In a cancer cell, contact with an opioid may cause either of two reactions: Sometimes, an opioid kills cancer cells; sometimes, it stimulates tumor growth.

Since doctors often give opiates to cancer patients, it’s crucial to know what effect a painkiller might have on the cancer.  “If the opioid will stimulate cancer cell growth, that’s a big problem,” Chen says.

Before joining Binghamton’s faculty in 2007, Chen worked in the Department of Pharmacology at the University of Minnesota Medical School. There, he identified an opioid antagonist compound that kills small cell lung cancer. It does this by blocking the transmission of a signal that is crucial for cell survival.

He also found that this compound doesn’t always produce the same results. When Chen introduced the same opioid antagonist to cells taken from three different individuals with small cell lung cancer, the compound killed 20 to 30 percent of the cells in one sample, 40 to 50 percent in the second and 90 percent in the third.

Chen’s study has enhanced scientific understanding of how an opioid may kill cancer, says Kalpna Gupta, assistant professor in the Department of Medicine at the University of Minnesota. It’s significant that Chen focuses on how opioids may kill cancer cells, rather than on how they may promote cell growth, as earlier researchers have done, she says.

“This is more appropriate, from a therapeutic point of view,” says Gupta, who studies opioid-mediated cancer-cell growth.  “That is why his study is very important. It not only provides a basic understanding, but an understanding of — once the monster is there — how do we get rid of it?”

Since coming to Binghamton, Chen has been laying plans to further explore the mechanism that allows an opioid to kill cancer cells. “I still don’t know what molecule it’s targeting,” he says. His next goal is to identify the key receptor on the cancer cell. “If I can identify this molecule,”  he says,  “then I can study whether it’s valid as a target for an anti-cancer drug.”

In the long run, Chen’s research on molecular signals in neurons and his research on cancer cells may lead toward a common goal. He hopes to find an opioid that reduces pain in cancer patients, doesn’t cause side effects or addiction and kills tumors.

“If the compound that we develop to kill the cancer cells also can block drug tolerance and dependence, that will be one drug that does two things,” Chen says. “That would be wonderful.”

The scientist becomes a patient

Susannah Gal’s work on cancer cell biology provided a special perspective after she was diagnosed with breast cancer in May 2009.

Gal wondered about the genetics of her tumor and how that profile helped her doctors determine her treatment. “I called the company that tested the tumor and asked them to give me a list of the genes,” she says. “I recognized a bunch of them.”

Before her surgery, Gal arranged to send the tumor to a repository where other scientists could access it for research. She wanted to obtain some of the cells herself, but she didn’t have time to go through the necessary protocols before her operation.

In the future, though, Gal may put in a request and take advantage of the chance to study the cells that attacked her body. “I was working with breast cancer cells before I got breast cancer,” she says. “So I’m interested, potentially, in bringing my cells back into the lab.”

Amino acid: A set of 20 molecules used to build proteins. Proteins consist of one or more chains of amino acids.

Chromosome: An organized package of DNA found in the nucleus of the cell.

Enzyme: A biological catalyst that is almost always a protein. It speeds up the rate of a specific chemical reaction in the cell.

Microtubules: Tube-like strands of proteins that give shape to many cells. They participate in cell division as well as cell movement.

Mitosis: The process during which duplicate chromosomes are prepared for division into two cells, which is completed during a phase called cytokinesis.

Neuron: The basic cell of the nervous system.

Opioids: Compounds found in or derived from opium that are often used as painkillers.

Phosphorylation: A chemical process that activates or deactivates many protein enzymes, causing or preventing the mechanisms of diseases such as cancer and diabetes.