A flash of insight 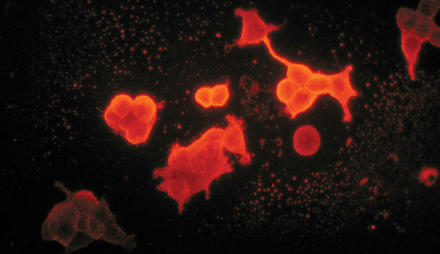 Imagine never having seen a car before and trying to determine what makes the vehicle run. That’s how Christof Grewer begins to explain his research on tiny proteins in the brain.

“We would be interested in seeing what happens when the car is moving, and we’d take pictures of that,” he says. “We’d see the pistons moving, and that would be the beginning of understanding.”

Grewer, a biophysical chemist at Binghamton University, studies glutamate transport proteins, miniscule components of our brains that move glutamate among cells. Glutamate, an important molecule in cellular metabolism, is also a neurotransmitter.

Learning how those triggers function could have major implications for human health. For example, during a stroke, when blood and oxygen to the brain are restricted, brain cells release glutamate into the space surrounding them. That starts a toxic chain that can kill brain cells and harm certain brain functions.

Knowing how the glutamate molecules are transported through cell walls could one day lead to drugs that help or halt the transport.

Grewer — one of perhaps two dozen researchers in the world who work on this problem — switches analogies as he continues describing the way these proteins move. Now he’s talking about a tall building.

In this case, glutamate molecules are the people. The elevator cars are the glutamate transporters. And the electricity and wires that move elevator doors are — well, that’s what he’s trying to figure out.

Grewer’s brainstorm was to create a method that uses lasers to trigger the transports’ action. By controlling when the movement happens, he can document it.

It all goes back to his analogy of photographing a car’s pistons. Taking snapshots may illuminate how the transporters and glutamate molecules work together.

Grewer stumbled onto the glutamate transporters.

When he was a graduate student in physical chemistry at Johann Wolfgang Goethe-University in Frankfurt, Germany, his research focused on chemistry and light. His introduction to biochemistry — and to glutamate receptors — came during a post-doctoral fellowship at Cornell University.

“We were trying to activate these receptors on a very fast time scale,” he says.  “It’s not that easy to do.” 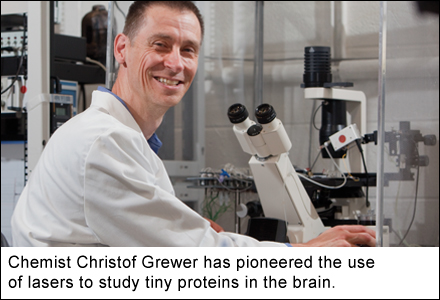 His background in chemistry and physics brought fresh insight to the lab. What if, he thought, a flash of light could help trigger the transport process? By timing the reactions, the researchers could better capture what happens during the glutamate transfer.

“They were so interesting to me that I just had to stay with them,” Grewer says of glutamate transporters. “I thought, that is just the most amazing thing to study.”

Most biochemical research on the brain focuses on possible cures, says Peter Larsson of the University of Miami. Many researchers experiment with known drugs to judge their effect on brain function.

“In most proteins, and in biology these days, we know the genetic code, and we know what the DNA looks like, and we know how many proteins you have in your body,” Larsson says. “But we don’t really know how these proteins work, how they function.”

What sets Grewer apart in this small community of researchers? “He’s pioneering using lasers,” Larsson says. “It had been used on other types of proteins, but nobody has used it in this type of study.”

Grewer took his studies back to Germany for a few years before accepting a post at the University of Miami School of Medicine.

“In the medical school community, there is more interest in the neuroscience,” Grewer says of his time in Miami. But he didn’t teach much, and he missed working with undergraduates.

At Binghamton, Grewer teaches every semester.

Donald Nieman, dean of the Harpur College of Arts and Sciences at Binghamton, says Grewer’s arrival in 2008 also created opportunities for interdisciplinary collaborations in biology and chemistry. “While the research Christof does is very specific and doesn’t replicate what others are doing,” Nieman says, “the basic science and techniques he is using mesh nicely with the work of several faculty members.”

Grewer’s research, which is supported by the National Institutes of Health, is painstaking and full of dead ends. Results are years, and possibly decades, in the making. Frustration comes easily.

“With the teaching, you see the outcome much more quickly,” he says. “When you give a lecture and have a student later come to you with a question and say, ‘This is the first time I’ve ever really understood that’ — that’s a very gratifying feeling that you don’t often have in the research.

“Teaching gives you the strength to keep going with the research.”