Justice for all: Understanding human rights 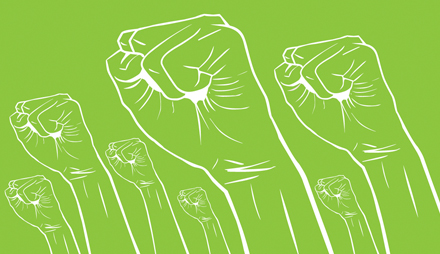 One applies the rigors of the scientific method to the study of human rights, quantifying for the world and its leaders what it means to be free.

Another, a pioneer in the study of women in German history, details in her latest book how advancements in social justice spring from a deep well of hope among average citizens.

A third won a Pulitzer Prize for his page-turning look at Japan’s World War II Emperor Hirohito, exploring in new ways the ethical dimensions of his reign.

Binghamton professors David Cingranelli, Jean Quataert and Herbert Bix embrace the role of history and political science in understanding human rights. The quest for justice is informed by the historical or political themes they coax into modern relevancy every day.

His inspiration was former President Jimmy Carter’s articulation of the responsibility of the United States to advance human rights around the world, but the connection to his own work came after he read a senior scholar’s assertions that U.S. international aid regularly flowed to draconian regimes.

“I was stunned by that,” Cingranelli says.

So he dug deeper, found flaws in the methodology, and knew he could do better. “It’s impossible to engage in meaningful social change without measuring what it is you want to change,” he says. “Otherwise, you can’t tell if you are being successful or not. I want to do something that theoretical scholars can use that also might help policy makers make the world a better place.” 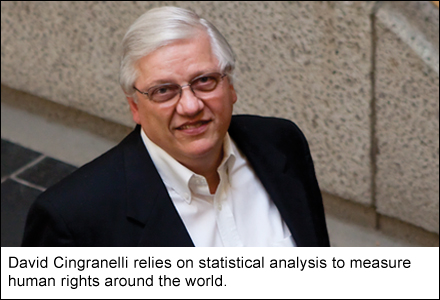 Some bristle at Cingranelli’s application of statistical analysis to such a human cause, or at state leaders’ acceptance of his data. He notes that coming up with reasonable definitions about what constitutes rights can be challenging. But relying on self-appointed arbiters of what is worthy of quantification means missing a major avenue toward change.

The data set describes a wide variety of government human rights concerns, including torture, workers’ rights and women’s rights, over a more than 25-year span.

Consider some of the more challenging definitions in the project: While it might be culturally sound in some countries to limit the movement of women in relation to their husbands or families, Cingranelli doesn’t buy such exceptions.

“If you can’t get a visa because you are a woman or unless your husband agrees or your father agrees, well, we decided that if half the population can’t move, we’d say that wasn’t good,” he says. “There is no international court (to decide these things), so we have to come up with measures. There are things we never would have thought of until we got into this.”

Todd Landman, director of the Institute for Democracy and Conflict Resolution at the University of Essex in England, says the CIRI data set is the leading resource for cross-national and time-series, standards-based measures of human rights. When asked about Cingranelli, Landman says simply:  “His work has had a tremendous impact on human rights scholars and practitioners over the last 30 years.”

If Cingranelli hopes to find truth from a view above the political and cultural fray, colleague Quataert wades deeply into all human complexity can offer.

In her latest book, Advocating Dignity: Human Rights Mobilizations in Global Politics (University of Pennsylvania Press, 2009), readers learn how 14 middle-aged, mostly working-class mothers in Argentina transformed the cases of their “disappeared” loved ones into a matter of national urgency. She also describes how the work of one South African woman brought her struggles against apartheid to an emerging global feminist mission. 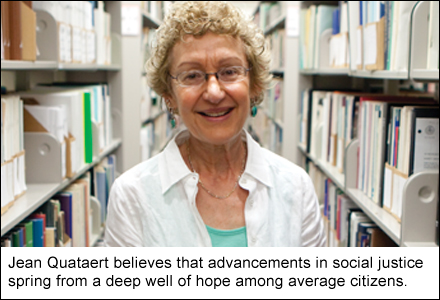 Quataert’s internationally recognized scholarship relies on the personal. In the book, she recounts how one of the Argentinian mothers describes her missing son: “Everything was important about him, his studies, his work, his political ideas. Every part of his life was important, his marriage, the birth of his children, his work. He had so much, his dreams, his ideas, all cut off.”

Quataert follows: “In these mothers’ conceptual universe, their children had the right to pursue the gift of life that they, as mothers, had given them.”

Most people, she says, have a political view of human rights violations, summoning images of state abuses and genocides.

“I am reminded of Secretary of State Hillary Clinton, who went to China a few years ago and said, ‘I am not here to talk about human rights but about climate change,’ as if you can exclude the ecological and environmental integrity of the globe from human rights considerations,” Quataert says.

“But human rights forces us to think about the kind of society and world we live in — after all, rights are not ends in themselves but means to achieve the full development of the human person and ensure a life of dignity.

“Poverty and deprivation may not make the headlines of newspapers, but they are a terrible threat to human life,” she says.  “They make all of the other pressing problems of the globe much more difficult, for example, the problems of failed states, the dangers of not educating young people, providing adequate food and water, even terrorism.”

The idea that human rights cannot be considered an abstract concept anymore is a significant vein that runs through the three professors’ work.

Quataert hopes her scholarship will inspire others to get involved, whether by writing letters or speaking out. Bix wrote a scathing critique of Israel’s actions in attacking the Turkish aid flotilla off Gaza last year. Cingranelli continues to push students in his classes on human rights to question their assumptions.

“I’m always delighted to have students in the class who are critical because it helps us have great debates,” Cingranelli says.

Quataert, who oversees a minor field in the history of human rights, says she hopes her students come to understand just how dynamic and global the human rights system is as it confronts abuses and violations.

“Much of the literature on human rights is written from the perspective of the present, so I offer an historical account of the emergence of the human rights system,” she says. “It was created through the post-World War II collective system of the United Nations, and I stress the many complex factors and human actions that led to its formal emergence between l945 and 1949: changes in the international system with the codification of international law, emerging international organizations, transnational advocacy groups, new intergovernmental agencies, growing literacy, and print and media circulation.”

Students read early international humanitarian law for its values of common humanity and shared fate and examine the notions and ideas behind the many transnational movements for justice emerging after the middle of the 19th century. Then Quataert has them examine the way human rights principles were incorporated into the U.N. Charter and the creation of the U.N. institutions for human rights oversight, including the Commission on Human Rights and the Commission on the Status of Women. “My view is that the whole U.N. system is shaped from below,” she says, “by people caught in real-life crisis.” 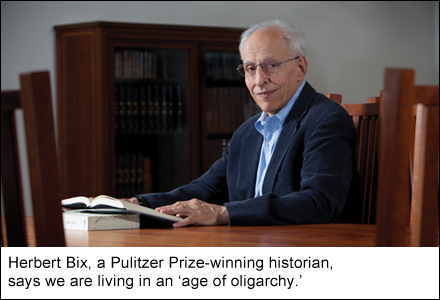 Bix, whose current research centers on Japanese and American wars of the 20th century, brings to his work a focus on human frailty and susceptibility to political and religious illusions and dogmas.

The author of Hirohito and the Making of Modern Japan continues to explore the war crimes for which Japanese defendants in post-World War II international criminal trials were punished. He also compares them to the war crimes perpetrated by U.S. military and civilian personnel in recent years.

“As a historian of modern Japan and its wars, I tend to think in comparative terms, contrasting U.S. and Japanese behavior in different phases of their imperialist expansion, in different regions of the world,” he says.

Indeed, Bix goes so far as to call this an “age of oligarchy.”

“We easily demonize the Taliban who resist us, and we commit war crimes against the civilian populations of Afghanistan, Pakistan and Iraq,” he says. “Yet we do not view ourselves as fighting wars of choice that destroy their societies and harm ourselves. Aren’t these contradictions worth thinking about?”

Bix says his aim is to bring historical knowledge to bear on the study of important contemporary issues. “Why, for example, are legal benchmarks for punishing war criminals ignored whenever American forces or friends of America such as Israel are involved?” he asks. “Who is the enemy and who gets to define him? What light does a nation’s way of waging war shed on its institutional structure and military decision-making?”

The Cingranelli-Richards (CIRI) Human Rights Data Project, run by Binghamton University’s David Cingranelli and David Richards of the University of Connecticut, offers its data set free to nonprofits around the world. CIRI, which is funded by the National Science Foundation, issues scores annually for each country in the world for 13 different human rights (including torture, workers’ rights, women’s rights and freedom of religion). The scores are used by the World Bank, European governments, the U.S. State Department and other agencies to evaluate their programs and help make decisions about distributions of funds.