Improving cell phones, one drop at a time 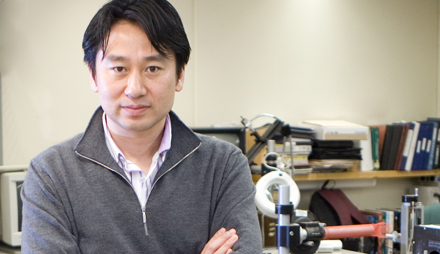 Once upon a time, when you dropped a radio, camera or phone and it broke, there was only one person to blame for its destruction: the klutz who dropped it. But now that these products have melded into one and shrunk to the size of a deck of cards, we expect our phone/television/camera/video recorder/music player/daily planner to endure a mere 3-foot fall.

“Consumers are getting pickier,” says Seungbae “S.B.” Park, associate professor of mechanical engineering at Binghamton University. “They say, ‘Hey, my friend dropped Product A more than a dozen times, and it’s still working fine. And I dropped mine once from not very high, and it’s broken. Mine must not be as good.’ Consumers are demanding manufacturers make devices more robust, while at the same time attractive, thin and light.”

Today, manufacturers don’t have to worry about longevity as much as they once did because people don’t expect their cell phones to last more than a couple of years. The biggest challenge is the ability to withstand the impact of being dropped.

The easiest, cheapest way to make a product sturdier is to add thickness and padding, but consumers don’t want fat phones. So manufacturers are looking more deeply into the mechanics of how a phone breaks when it hits the floor. The world’s second-largest cell-phone manufacturer, Samsung, turned to Park to analyze how its products fared.

“During a drop, there are many things happening in a fraction of a millisecond,” Park says. “The manufacturer needs to understand those very high-speed drop sequences.”

To slow down the action, Park and a team of students record drops with a high-speed camera that can take up to 300,000 frames per second. This allows the researchers to see precisely when parts such as chips and solder connections flex and break. They quantify the deformations and enter the data into a computer program so they can simulate drops from all possible positions and look at how all the potential drop energy is consumed — through the case breaking, sound generation, circuit-board flex, etc. They then try to come up with solutions that minimize damage of the critical components inside the case.

“Then we try to understand the best way to rearrange the chip location, model shape, battery position, battery size,” Park says. The battery alone offers numerous possibilities. “With the same amount of juice inside a battery, there are many different ways of making that chunk inside a cell phone — put it up, down, in the middle; chubby or thin and wide. There are many variations we can come up with.”

Finding the ideal balance informs design from the early stages of product development. Park realizes that “designers are designers,” artists who want to create a thing of beauty first and a thing of utility second. His work gives them and the engineers they work with a starting point.

Samsung brought its products to Binghamton several years ago when it joined the Integrated Electronics Engineering Center (IEEC), an organized research center on campus. The center’s engineering advice is second to none, Samsung Senior Engineer Soonwan Chung says.

“Binghamton University is known to have a lot of capability in faculty, facility and industry network,” Chung says. “Professor S.B. Park is so specialized in electronics reliability, and Samsung wanted to get his experience and consult. His research output helped us to make Samsung mobile phones robust in view of mechanical reliability.”

The Samsung-University relationship is a win for everyone, says James Pitarresi, chair of the mechanical engineering department. Samsung receives valuable insights while the University acquires greater visibility. And faculty members gain access to products that won’t be released to the public for a couple of years while providing their students with industry experience.

The relationship also is good for the public because it creates knowledge that is useful across industries. When Park’s group started looking at how cell phones react to drops, Pitarresi was amazed to find that there was hardly any published literature.

“There’s one of two reasons,” he says. “No. 1, it’s because we’re developing products so fast that research hasn’t caught up, and we all have our fingers crossed. Or No. 2, it’s because some companies have done some testing, but they keep it very proprietary. So we’ve been able to do some fundamental work here and publish it, which helps the entire industry.”

Da Yu, a doctoral student in mechanical engineering who wrote his master’s thesis about the drop impact on reliability, says the Thomas J. Watson School of Engineering’s business connections give him a leg up on his competition. As a student he has already worked on industry issues, sat in on conference calls and learned about real-world needs and methods.

Yu recently interviewed with Apple Inc., whose iPhone revolutionized cell phones, and was offered an internship. The area the company was most interested in was his work on drop impact and reliability.