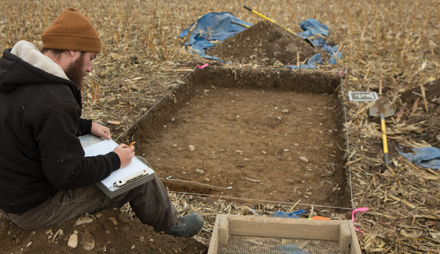 Experts from the Public Archaeology Facility recently took their shovels to a cornfield about 45 miles west of Binghamton, searching for evidence that could earn that site — the scene of a small but significant Revolutionary War battle — a spot on the National Register of Historic Places.

Four days of digging beneath the corn stubble yielded project director Michael Jacobson and his Binghamton University colleagues just a few modest items, including a charcoal smudge and the possible remains of a wooden post. But if test results show that those artifacts date from the late 18th century, that could be enough to convince National Register staff that the location of the Battle of Chemung should be preserved for further study.

Jacobson, PAF’s battlefield research coordinator, launched the dig in Chemung, N.Y., at the request of local residents who care about historic preservation. Once home to the Village of New Chemung, the site is a few miles east of the better-known Newtown Battlefield. Historians often treat the Newtown and Chemung encounters as one event, although they occurred two weeks apart.

“There was a local push to highlight the fact that Chemung was a separate battle from Newtown, and also to help preserve the landscape,” Jacobson says.

PAF received a $37,357 grant in 2009 from the National Park Service’s American Battlefield Protection Program to conduct historical research on the Chemung battlefield and do some initial mapping. In 2012, the program awarded PAF a further $56,194 to perform an archaeological field survey.

The Battle of Chemung was part of the Sullivan-Clinton Expedition, a 1779 campaign of the Continental Army against British loyalists and the pro-British Iroquois. Gen. John Sullivan’s troops were camped at Tioga Point, near the present-day Athens, Pa., when scouts brought word of the settlement at New Chemung.

The village served as a base for various raiders, including, loyalists, Delaware and other Native Americans allied with the British. “It was also a traveling stop for loyalist refugees from New York City and Philadelphia who were making their way to Canada,” Jacobson says.

The Continentals stormed New Chemung on Aug. 13, only to find that all the occupants had fled. Heading west in pursuit, a detachment of soldiers encountered a group of Delaware warriors waiting in ambush about a mile away. The Continentals fought off the Delaware and then returned to New Chemung, where they burned the village to the ground.

To locate New Chemung in the landscape, the Binghamton archaeologists used a geographic information system (GIS) to lay an image of the Sullivan expedition’s official map over a present-day topographical map. They also used written accounts from the time of the battle, taken from Continental soldiers, loyalists and the Delaware, to pinpoint landmarks.

Finally, the archaeologists, guided by specialists from Ithaca College, walked the field with a magnetometer, a sensing device mounted on a cart. That exercise produced a printout that resembles a moonscape. The many dark splotches set against the gray background indicate disturbances in the soil that might — or might not — point to artifacts buried below.

At each of several spots that seemed most promising, the archaeologists dug a rectangular trench about 30 centimeters deep. In November, one of those test trenches produced the charcoal smudge, and another the traces of what perhaps was a post.

Now, the group awaits test results, hoping that the results will persuade the National Register that the site is significant enough to preserve, Jacobson says. “We’ll get the data, tie it with the historical documents and try to put together the best package we can.”