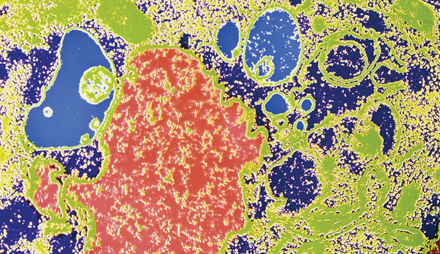 Our mitochondria use the food we eat and the oxygen we breathe to produce energy. It’s vital to our survival, and yet sometimes this process goes awry. Every year, about 4,000 children in the United States are born with an inherited mitochondrial disorder — that is, their cells can’t produce energy properly. The resulting byproducts may damage organs and cause developmental delays, seizures and even blindness.

Binghamton University biologist Heather Fiumera thinks that some of those health problems may lie in the fact that mitochondrial function requires the cooperation of two different genomes. Every human inherits two genomes: one in the cell’s nucleus, which is a mix of mom and dad’s DNA, and a different one in the mitochondria (the cell’s powerhouse), which contains a replica of mom’s mitochondrial DNA. “It may be that some combinations of mitochondrial and nuclear genomes work together more efficiently than others,” Fiumera says. “While mutations in either genome may affect mitochondrial function, they don’t explain the whole story. You might inherit a mitochondrial genome that helps you become a world-class marathon runner, but your brother” — who would have the exact same mitochondrial genome as you — “might not be as successful, even with the same training.” Similarly, a mitochondrial mutation may cause a severe metabolic disorder in one sibling, but mild symptoms in another, because of how the mitochondrial mutation interacts with their different nuclear DNAs. 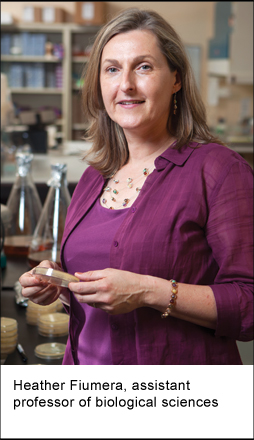 Fiumera and her colleagues received a $1.25 million award from the National Institutes of Health (NIH) to explore the importance of these genetic interactions. The five-year grant will help Fiumera scale up the studies she is already doing in yeast. “We’re swapping mitochondrial genomes and seeing if it affects how our yeasts grow,” Fiumera says. “And we are finding that it really matters.”

Kristi Montooth, a biologist at the University of Indiana, says the work may help to illuminate why metabolic diseases are so variable and unpredictable. “There are mutations in mitochondrial genomes that, on their own, don’t have a negative effect,” she says. “But brought together with certain nuclear genomes, there’s a synergistic effect that causes them to function badly.”

The problem goes back to the evolutionary origins of the mitochondrion. Scientists believe that a mitochondrion has its own DNA because it was once a free-living bacterium that was engulfed by another cell. But instead of becoming dinner, the mitochondrion was co-opted to provide energy for its predator. The two cells managed to work together and, over time, became dependent upon one another. Mitochondria have inserted some of their genes into the nucleus, and the nucleus uses protein messengers to control how much energy the mitochondrion produces and how it does its job. It may be that the two genomes are still co-evolving and still learning the best ways to live together peacefully.

“Heather’s exploiting a lot of the genetic and genomic tools that yeast offers to take this to the next level,” says David Rand, who studies the coevolution of nuclear and mitochondrial genomes at Brown University. “The ability for Heather’s experiment to track down the interactions is going to be quite powerful.”

Yeast is a single-celled fungus with some powerful genetic tools that allow Fiumera to mix and match mitochondrial and nuclear genomes. Are there special combinations that allow better mitochondrial performance? Does “strain A” work better with mitochondrion 1 while “strain B” works better with mitochondrion 2? Fiumera will decide which combinations thrive best by subjecting her yeasts to a variety of unpleasant environments — including heat stress, oxidative stress and low-nutrient conditions — and measuring how well the mito-nuclear hybrid strains grow.

Montooth says previous studies have focused on swapping mitochondria between different species of yeast. But by looking at the variation within just one species and exploring how that variation relates to dysfunction, Fiumera’s work is more relevant for studying human disease.

So far, Fiumera’s preliminary studies have shown that the mitochondrial-nuclear interactions are responsible for as much as 20 percent of the differences in growth rates between strains. “That’s huge,” she says. Until now, Fiumera and her team have managed to look at the interactions among only a handful of strains. The NIH grant will help to buy laboratory equipment that will measure growth rates in about 200 samples at once, helping Fiumera to test hundreds of different yeast strains. She predicts they will collect more than 10,000 growth rates in just the initial phase of the project.

The second part of the experiment will be to map the genes involved in determining whether a combination is effective or ineffective. Fiumera says she’d eventually like to see whether beneficial combinations are more common in wild yeast populations; if mitochondrial-nuclear interactions are as important as biologists expect, it is likely that natural selection favors different combinations in different environments.

But Fiumera won’t be doing all of this work alone. “This project is a marriage between yeast genetics and population biology, and it is enhanced by my actual marriage to a population geneticist,” she jokes, referring to her husband, Binghamton biologist Anthony Fiumera, who will be collaborating on the project. Binghamton computer scientist Kenneth Chiu will lend his expertise to help the biologists parse through huge data sets.

Since energy production is so vital to a cell’s functioning, mitochondrial genes and machinery tend to be highly similar in organisms as far flung as yeast and humans. That allows Fiumera to hope that one day her research will be used to devise treatments for people who are suffering from debilitating metabolic disorders.

“You have to understand the mechanism behind a problem,” she says, “before you can fix the problem.”

Yeast as a Model Species

Why do scientists study yeast, a single-celled fungus, when they want to learn more about human genetics? Yeast, like mice and fruit flies, is a “model species,” one that shares certain important traits with humans even though it appears to be quite different. Yeast grows quickly and costs little to maintain; its genes are also relatively easy to manipulate. Heather Fiumera uses Saccharomyces cerevisiae in her experiments.

DNA: The chemical name for the molecule that carries genetic instructions in all living things

Genome: The genetic material of an organism

Mitochondria: Cellular sub-compartments that convert food and oxygen into energy

Mutation: A change in a DNA sequence

Nucleus: The structure that holds most of a cell’s DNA