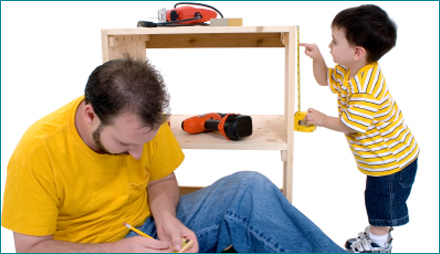 ﻿Learning a hobby or other complex task in childhood with assistance from a trusted adult may help guard against the emergence of a personality disorder (PD) later on in life, reports a study in the current issue of the journal Development and Psychopathology. Spending time with a child by reading, helping with homework or teaching organizational skills helps to foster psychological health in adulthood.

“The strong interpersonal connectedness and social skills that children learn from having active, healthy engagements with adults fosters positive psychological development,” said the study’s lead author, Mark F. Lenzenweger, a distinguished professor of clinical science, neuroscience and cognitive psychology at Binghamton University. “With it, a child develops his or her affiliation system – their connection to the world of people. Without it, the way a child connects with other human beings can be severely impaired. And as I found out, it is this impairment that predicts the appearance of schizoid personality disorder symptoms in emerging adulthood and beyond.”

Lenzenweger says that the real importance of his findings is that it underscores the value of actively engaging a child during their formative years — which is particularly relevant in this age of day care, TV, videos and Web-based virtual reality games.

“Through a rich degree of proximal processes or, more simply put, interactions generally associated with a caring and strong interpersonal relationship, a significant adult — typically a parent but who could also be a caregiver or role model — can help a child to progress to a richer, more differentiated, and fuller psychological experience,” Lenzenweger said.

These relationships foster a willingness to engage with others, which is the psychological foundation of the human experience. But for some PD sufferers, this willingness to connect with other people is markedly absent. Along with the question of why those connections weren’t happening, Lenzenweger asked an even more probing question: What happens when they do?

“For years, researchers have speculated whether elements in the environment could create or elevate risk for a PD,” he said. “For example, childhood trauma has been seen as important. However, to date, no prior research has demonstrated what factors, if present, help to protect against a PD — until now, that is.”

However, the critical wild card in all of this was genetic influences — our inherited tendencies that dictate our psychological and behavioral responses to the kind of situations and stress that life constantly throws at us. Could the experience of a rich proximal process in early life foster the development of a strong affiliation system and healthier personality adjustment in adulthood? Lenzenweger’s study suggests that this is the case.

“Even when we factored in temperamental features such as anger, fear and distress, which are suggestive of a difficult or challenging child and which might make connecting with other people difficult, we still found that having a strong relationship with a significant adult has a huge impact on development,” Lenzenweger said. “This means that the role of proximal processes in the development of the child did not simply mean that he or she was easy to relate to and, therefore, the recipient of engaged attention of adults.”

By drawing data from his Longitudinal Study of Personality Disorders (LSPD) study, which began in 1991 and was the first of its kind funded by the National Institutes of Mental Health, Lenzenweger was able to conduct a multiwave analysis that enabled him to use time as an important research lever. By using the scientifically powerful multiwave approach to studying people over time, Lenzenweger’s LSPD is in a relatively novel position to account for how individuals change during that period. He is also able to pinpoint what kind of elements are important in determining final outcomes in adulthood, particularly in respect to personality disorders.

According to Lenzenweger, not only is this study breaking new ground in PD research, it also represents a sea change in research methods. Before the inception of the LSPD, existing studies had simply used test-retest methods in which people are studied once and then again at a later point. Lenzenweger’s approach tracks subjects for a longer period of time and uses a range of measurements, which offers a better understanding of the link between childhood and adulthood. He plans to assess all of these subjects again in the next few years, tracking the group as they enter their late 30s.

Lenzenweger also hopes secure genetic data from all of the subjects to help further the understanding of the genetic factors that might be predictive of change and stability in personality and personality disorder over time. This kind of data collection would also be new to the study of PD, allowing Lenzenweger to again enter uncharted territory in the field.

“This new approach, which would include genetics, will give us a much better idea of how subjects are doing as they encounter the complex things that happen further along in the course of life,” Lenzenweger said. “This includes marriage, divorce, sickness, health, childbearing, career, unemployment and economic challenges. A focus on these factors, both biological and social, will provide a clearer window on how personality and personality disorder changes across the lifespan, and give us a clearer insight into territory that remains largely unexplored.”