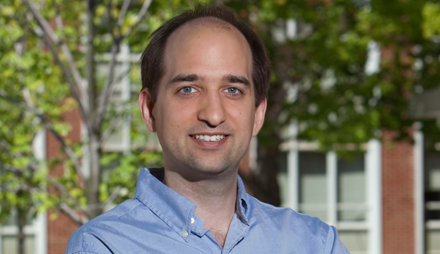 Binghamton University physicist Michael Lawler and his colleagues have made a breakthrough that could lead to advances in superconductors. Their findings were published this week in the British journal Nature.

The data Lawler analyzed have been available for several years, but have not been well understood until now. “The pattern looked so mysterious and interesting,” he said. “It’s so different from any other material we’ve ever looked at. Trying to understand what this data is really trying to tell us has been one of our big ambitions, and we think we have captured one of its essential ingredients.”

Lawler, a theoretical physicist, worked with physicists at Cornell University, Brookhaven National Laboratory and laboratories in Japan and Korea on this research. They found what may be the key to unlocking the secrets of the so-called “pseudogap phenomenon” in superconductors.

The “pseudogap phenomenon” is the remarkable vanishing of the low-energy electronic excitations in high-temperature superconductors. A material experiencing this rare phenomenon becomes mostly insulating but otherwise behaves like a superconductor. And because this can happen at room temperature, scientists believe it may be possible for superconductivity to exist at these temperatures.

In principle, a room-temperature superconductor could allow:

“It’s one of the most interesting problems that we have in physics,” Lawler said. “I believe that having a challenge at that level can help produce breakthroughs in science.” 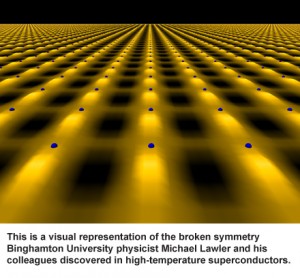 He and his colleagues found that the electronic states of two neighboring oxygen atoms in these superconductors are different from each other. Looking at the electronic structure, then, the physicists were able to observe a broken symmetry. “It is like the electronic states were stretched along the X-direction compared to the Y-direction,” Lawler said. “That the pseudogap phase has this order allows us to make the bold claim that it is actually a distinct phase of electronic matter.”

To understand this observation better, consider the phases of rod-like objects. Rod-like polymers have many more phases than the solid, liquid and gas phases of more ordinary atoms. At high temperatures, they are in a gas phase like such atoms. However, at lower temperatures, all the rods can point in one direction while still moving around freely like a gas or liquid. Physicists call this a “nematic phase.” The organization of the rods in this phase is similar to what the researchers observed in the electronic states associated with the pseudogap phenomena.

More phases of rod-like objects exist at lower temperatures until eventually the rods freeze into a crystal. Physicists call these intermediate phases “liquid-crystal phases.” They are responsible for the liquid crystal displays commonly used in watches and televisions.

Lawler, who joined Binghamton’s faculty in 2008, earned his PhD at the University of Illinois at Urbana-Champaign and was a postdoctoral scholar at the University of Toronto. A self-described “pencil-and-paper theorist,” he is open to discovery in unexpected places. That was certainly the case with this project, as the inspiration for the data analysis came to him while he was shopping at Home Depot.

The researchers’ success, Lawler said, is owed to both the unusual data analysis—which is derived from radio technology – and the unique capabilities of his Cornell colleagues, who have a scanning tunneling microscope that enables them to look at single atoms while maintaining a large field of view.