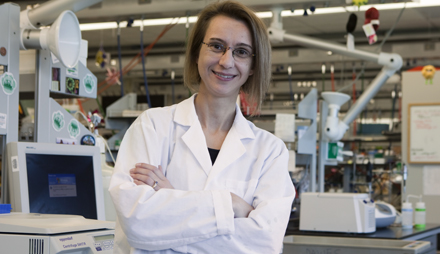 Researchers at Binghamton University have identified three key regulators required for the formation and development of biofilms. The discovery could lead to new ways of treating chronic infections.

Biofilms – communities of bacteria in self-produced slime – may be found almost anywhere that solids and liquids meet, whether in nature, in hospitals or in industrial settings. Biofilms are implicated in more than 80 percent of chronic inflammatory and infectious diseases caused by bacteria, including ear infections, gastrointestinal ulcers, urinary tract infections and pulmonary infections in cystic fibrosis patients, according to the Centers for Disease Control.

Biofilms are difficult to eradicate with conventional antimicrobial treatments since they can be nearly 1,500-fold more resistant to antibiotics than planktonic, free-floating cells. Biofilms also pose a persistent problem in many industrial processes, including drinking water distribution networks and manufacturing.

Karin Sauer, associate professor of biology at Binghamton, and graduate student Olga Petrova published their findings of key regulatory events required for the formation and development of Pseudomonas aeruginosa biofilms in PLoS Pathogens, a peer-reviewed open-access journal published online by the Public Library of Science.

Pseudomonas aeruginosa, an opportunistic pathogenic bacterium, is considered one of the primary causes of death in patients with cystic fibrosis, a common and life-threatening hereditary disease.

Petrova documented a previously unknown genetic program composed of several regulators by looking for changes in phosphorylation patterns in Pseudomonas aeruginosa. These regulators can not only be used to stop the development of biofilms at various stages in their growth but also to revert established biofilms to an earlier developmental stage.

“The problem you have when you have a chronic infection is that your immune system is trying to clear the infection but is unable to,” Sauer said. “And the longer the chronic infection goes on, the more damage there will be to tissue at the site of the infection. That’s because the immune response often involves the release of toxic compounds that have no effect on biofilms but can damage the surrounding tissues.”

Sauer’s research is driven by several key questions, she said: “Can we outsmart the biofilms? Can we interfere with biofilm antibiotic resistance? Can we figure out how to prevent biofilms from forming and becoming resistant to antibiotics?”

Some recent findings seem to offer a resounding yes to these questions.

In addition to regulators required for biofilm formation, Sauer and her team recently identified a regulator that is only expressed in biofilms and which seems to be responsible for regulating antibiotic resistance.

“We can modulate the resistance of biofilms now by over-expressing or inactivating this particular regulator,” she said. “We hope to use these discoveries to treat infections by interfering with the way biofilms are growing and by reverting biofilms back to a state where they’re more easily treatable.”

Sauer’s research is supported by the National Institutes of Health, which has awarded her more than $3 million, and the Army Research Office. Her two major NIH-funded projects, which began this fall, look at different aspects of biofilms. One focuses on antibiotic resistance and the mechanism behind it; the other centers on dispersion, the process by which a biofilm breaks down into individual bacterial cells.

“Dispersed cells — or planktonic cells — are way easier to treat,” Sauer said. “We want to understand how bacteria decide when to leave the biofilm. We can use that as a way to treat chronic infections.”