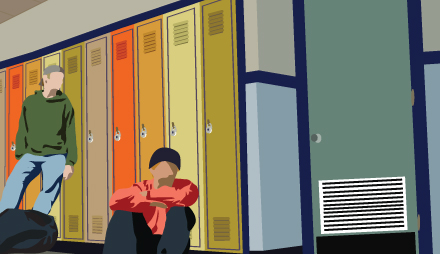 Ten years after the horrific massacre at Columbine High School sharpened the nation’s views on youth violence, Mary Muscari sees cause for optimism — and for deep concern — about the way adolescents are growing up in America.

“Many things have gotten better. School shootings are horrible things, but they’re incredibly rare,” said Muscari, associate professor of nursing at Binghamton University and a nationally known expert on parenting. “Schools are still basically a safe place. However, we have enormous issues with bullying and cyberbullying.”

Muscari has worked with juvenile delinquents since the early 1980s. As a pediatric nurse practitioner, she has also worked with healthy children throughout her more than 30-year career. Muscari, author of five books for parents, has conducted workshops around the country on topics such as keeping kids safe from predators, bullying and how to raise nonviolent children.

She approaches the problem of youth violence using a public health model, she said.

Muscari recalls vividly how the Columbine shootings, in which two teenagers killed 13 people before committing suicide, changed her professional life. She was scheduled to lead a youth violence workshop for teachers and counselors the week of the incident in April 1999 and expected perhaps 10 or 15 people to attend. After the shootings, organizers moved her to a room that could hold 75. It filled to capacity, and Muscari began making plans for what became her first book, Not My Kid: 21 Steps to Raising a Non-Violent Child.

The no-nonsense book includes ways to help children build self-esteem, manage stress and develop tolerance. It also encourages parents to watch for warning signs such as aggressive outbursts in pre-schoolers or mistreatment of animals in adolescents — and get help when they need it.

A typically reassuring passage from the book tells parents: “If raising a teenager makes you feel like you’re losing your mind, don’t worry. It’s normal — and temporary. Sparked by raging hormones, adolescence is a period of rapid physical and emotional transformation that can create a tenuous sense of balance for both teens and parents.”

Muscari continues: “Some degree of teen-parent friction is expected, but disruptive family conflict isn’t normal. Neither is persistent defiance, fighting or property destruction. This turmoil represents pathology, and it will not be outgrown.” She goes on to list behaviors that warrant professional attention.

Muscari’s ability to address these concerns clearly has made her not only a sought-after writer but also a popular speaker with several national organizations.

Dolores Jones, director of practice, education and research for the 7,000-member National Association of Pediatric Nurse Practitioners, said she considers Muscari a role model for other nurse practitioners. “Educating is one of the most vital roles that nurses play,” Jones said. “Being able to talk to the public in a way that people can understand is a special talent.”

Muscari, whose core philosophy could be summed up as old-fashioned parenting for modern times, acknowledges that today’s parents face certain new challenges.

The increased sexualization of childhood is one, she said, recounting the story of a mother who struggled to find a bathing suit appropriate for her young daughter. Increased sexualization is also seen with “sexting,” in which teens use technology to send flirty messages and provocative photos, have phone sex or meet up to have sex.

“Forty years ago, Mom could stop you from answering the phone,” Muscari said. “It was on the wall. I know my mom did. Technology has changed the way kids relate, and it has taken away some of their social skills. Back then, we had to talk to people face to face if we wanted to talk. It’s not to say technology is a bad thing, but it can be abused, as with sexting.”

She also worries about how children and adults alike have become desensitized to violence. Muscari said she often asks people whether they thought for just a second that they were watching a movie when they saw news coverage of the 9/11 terrorist attacks. The vast majority tell her they did, she said.

Other parenting concerns have changed little over time, Muscari said.

Her fight against materialism is an ongoing cause, for example. She encourages parents to ask their children in January what they received for Christmas. “You’ll see they already can’t remember many of the gifts,” she said, suggesting that parents think about whether an item will still be a prized possession years later before buying it.

Muscari said she wrote her first book hoping to help at least one child. She believes now she has had an effect on many more.

“It’s very rewarding,” she said. “There are results. And there’s no better reward than knowing you helped a kid.”