Lab zeroes in on war of the sexes 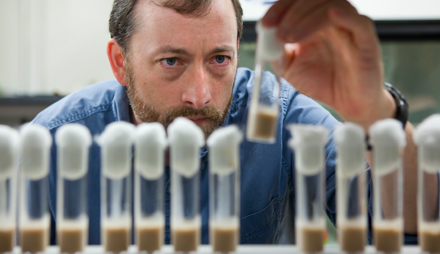 Dozens of vials — each containing a male and a female fly as well as a small amount of food — are lined up for observation. It’s 8 a.m. on the day of an experiment in which 800 such pairings will be arranged.

Fiumera, an evolutionary biologist, believes this experiment and others like it will lead to techniques for reducing agricultural pests and bugs that spread disease. “In theory,” he said, “you could design very specific biological-control mechanisms such that you could target one species or even a subset of that population and have no impact on other species.”

Fiumera’s lab specializes in large-scale experiments with the model system Drosophila melanogaster, commonly known as fruit flies. His findings are in some cases easily extended to other insects, including ones that spread malaria and other diseases.

“The interaction between the tricks males use to manipulate females for the male’s best interests and the techniques the female uses to limit that male’s ability to manipulate her is wonderfully exciting,” said Fiumera, whose work is funded by the National Science Foundation. “We have good evidence that this dynamic interaction is being controlled by proteins that males are transferring to females and proteins that females are producing in their reproductive system. It sets up this amazing co-evolution, almost an arms race between males and females of the same species.”

To understand Fiumera’s work, it’s essential to know that female fruit flies can mate with multiple males and that females have the ability to store sperm.

“We’re interested in trying to understand the forces that are driving these interactions between males as they’re trying to encourage a female to mate or competing to fertilize her eggs,” he said. “And, from a female’s perspective, why is she choosing to re-mate and whose sperm is she going to use? We’re trying to go after and identify the genes that are involved in these interactions.”

There are proteins produced by males that are secreted in the seminal fluid and transferred to the female during mating, Fiumera explained. It is only in the female where many of these proteins are physiologically active. His lab has shown that polymorphisms — natural variations — in one protein can affect female re-mating rates. Some of these male proteins are toxic to females; they increase the fitness of the male but at a cost to the overall fitness of his mate. Other proteins influence such factors as female egg-laying rates and sperm storage.

“We have a good understanding of individual roles of some of these proteins,” he said. “What we’re able to do now is take our understanding of the function of these genes and put them in the broader context of their evolutionary potential.” It appears that the success of a male depends not only on his genetic makeup but also the genes of the females with whom he mates.

Looking to the future

“Our lab’s unique contribution to this field,” he said, “is that we’re focusing on natural populations and natural variations to identify these male and female genes that are interacting with each other.”

One ongoing project is designed to test how the reproductive success of a male changes when he mates with different females under competitive conditions. Fiumera has found variations in male reproductive genes that show strong interactions with the genotype — or genetic makeup — of the female.

“That’s interesting,” he said, “because the fitness of a male depends on the genotypes in the female population. This suggests that some form of balancing selection could be operating.”

Evolutionary biologists are interested in balancing selection because it appears to preserve genetic variations in a given population. Mariana F. Wolfner of Cornell University said biologists want to know why there’s so much variation in nature, and what keeps it there.

“You would think that if there were a variant in nature that’s important, it would just sweep through the population, whether it’s fruit flies or humans,” she said. “But instead of that we see lots of variation, and we don’t understand why.”

Fiumera specializes in large-scale experiments. “In a full experiment,” he said, “we might do 2,000 to 4,000 matings and score the paternity of several hundred thousand offspring.”

Wolfner called Fiumera’s experiments enormous. “They have a statistical power much greater than they would otherwise,” she said. “You can pick up subtle effects that you wouldn’t be able to see in a smaller experiment. They are heroic.”

Balancing selection: A form of natural selection that preserves genetic variations in a population.

Genome: All the DNA contained in an organism or a cell.

Genotype: Genetic identity of an individual.

Mutation: A permanent structural alteration in DNA. Some mutations can improve an organism’s chance of surviving and passing the beneficial change on to descendants.

Phenotype: Visible traits of an individual, such as eye color.

Polymorphism: A common variation in the sequence of DNA among individuals.

Definitions provided by Anthony Fiumera and by the National Human Genome Research Institute.