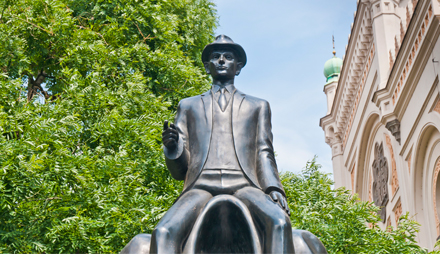 Kafka scholar Neil Christian Pages does more than encourage his undergraduate students to engage in research. He gives them the tools they need to demystify the literary academy.

A tiny figurine made out of thread — a former student’s representation of the character Odradek from Franz Kafka’s “The Cares of the Father of the Family” — hangs from one of Pages’ bookshelves. It’s material proof of the way Pages’ students engage with Kafka in his classroom and beyond it.

“I’m astounded by the extent to which they are able to bring to bear critical approaches to representation based on their readings,” he said. “They are inspired by the texts in such a way as to understand how the texts have inspired others.”

Pages, an associate professor, holds a joint appointment in German and Russian Studies as well as Comparative Literature. He received fellowships from the National Endowment for the Humanities as well as Binghamton’s Institute for Advanced Studies in the Humanities this year. The funding gave him some space to consider his work at the intersection of teaching and undergraduate research.

“As Paul de Man once said, ‘All scholarship has to be eminently teachable in order to be scholarship,’ Pages said. “The two have to be intertwined. They have to inform one another. Good teaching comes from research.”

Kafka, who was born in 1883 and died in 1924, lived an extraordinary life during extraordinary times and interacted with the important literary figures of his day in Prague. The author, who may be best known for his novella “The Metamorphosis,” never published a novel during his lifetime.

Pages is interested in Kafka’s continuing influence not only on literary scholarship but on musicians, visual artists, writers and others. His undergraduate seminar, Kafka and His Readers, considers that cultural influence as well as how the author’s biography influences the way he is studied.

Kafka’s language is very clean, Pages said. A short piece of his prose can be understood without translation by students after just a few semesters of German instruction. That’s exciting to him as a teacher because his students can often access the original texts in their research.

Even those who read Kafka in English seem excited by what they find. “That’s one of the interesting things about Kafka,” Pages said. “An American audience feels it has access to him without going through a translator, even though he is translated. He’s an author that undergraduates still recognize.”

Pages said undergraduates are often uncomfortable as they move from consuming knowledge to producing knowledge, in part because they haven’t been introduced to the way research is conducted in the humanities. He helps them to see how critics construct arguments and to understand the background that scholars such as Harold Bloom and Jacques Derrida bring to Kafka’s work.