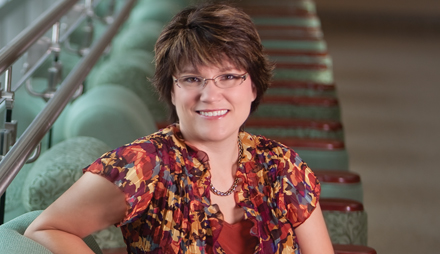 In each of two cities, a team of local agencies launches a campaign to keep children from joining gangs. The two use similar tactics, combining counseling, tutoring and recreation. One initiative shows great results; the other makes barely a dent. Why the difference?

Pamela Mischen’s research demonstrates that one program may have failed because the right people weren’t talking.

Traditional scholars of public policy trying to figure out what went wrong with a program might study the legislation behind it, or its funding. But researchers largely have ignored the dynamics inside the agencies that carry out policy, said Mischen, associate professor of public administration at Binghamton University.

That’s a mistake, she said. “Those turn out to be the most important things.”

To understand why policies fail or succeed, it’s essential to learn how people form networks within an organization, or among groups that collaborate, Mischen said. The tools she uses to explore those communication pathways come from complexity theory, a discipline that public-policy scientists haven’t called upon in the past. Mischen looks at service agencies in the same way that other scholars look at ant colonies, hurricanes or human cells.

Complexity theory examines complex systems — networks of interconnected agents that depend on one another. The agents might be ants, meteorological events or proteins. “In an organizational network, those agents are individuals,” Mischen said. In a coalition, they’re organizations. Members of a public-service network perform different tasks toward a common goal, and the work of each member affects the work of all the others.

Also, agents in a complex system share feedback that helps to shape future activity. When a school nurse notices that fewer second-graders are getting sick after their teachers launch a “wash your hands” campaign, she might urge the principal to expand that program to other grades.

Negative feedback discourages change; positive feedback spurs successful innovation, Mischen said. “Somebody is saying, ‘That really worked. I’m going to make the conditions such that you can continue to do that.’”

In 2007, they gave a social networking survey to 37 case workers who gathered in Binghamton for a program on self-injury among adolescents. The researchers chose this group in part because they expected that the case workers, who came from throughout Broome County, N.Y., might one day form a coalition.

The survey focused on trust and information flow. Asking each subject about his or her relationship with every other person at the meeting, it tried to determine who trusted whom and why. It also asked whom the subjects turned to for information about their work.

One surprise was that trust didn’t define how the case workers formed information networks. “We started with the assumption that the people they trust would be some of the most important people they would go to for information,” Mischen said.

Instead, the study found that people seek information from: a) the people they communicate with most, regardless of whether they trust them; b) people who have given them information before; and c) people they consider experts, leaders or the most active members of the network, assuming they have access to those people. Trust plays a role only in whether one person considers another an expert.

Among other things, the study suggests that people in an organization seek information from the same sources again and again. “Over time, we build information pathways within networks that are independent of perceived expertise,” Mischen said. “They’re probably there because they’re convenient. That doesn’t bode well for good information sharing.”

The easiest sources of information aren’t necessarily the best ones, and they don’t offer fresh insights. “This is an explanation for why a group of people may not produce good decisions. Information tends to get recycled,” Mischen said.

Mischen’s research helps her advise local organizations in her work as director of Binghamton University’s Center for Applied Community Research and Development. For instance, she is helping the Broome County Youth Bureau transform itself into a network-administering organization. In that capacity, rather than simply redistribute state funds to local organizations, the Youth Bureau will coordinate the work of local agencies and not-for-profits that serve young people.

To help promote better collaboration, the Youth Bureau is conducting a social network analysis of local agencies. “We want to know how networks are communicating,” said Beth Roberts, the Youth Bureau’s executive director. “Once we know that, we can see where the potential challenges, gaps and barriers are.” It’s important to know, for example, whether employees at all the agencies know about the full range of youth recreation programs available in the county, so they can refer young people to the programs that will serve them best.

“Pam’s work in the center has really influenced how the Youth Bureau looks at its mission, and how we are implementing programs in the community,” Roberts said. “We’re looking at things through a different lens.”