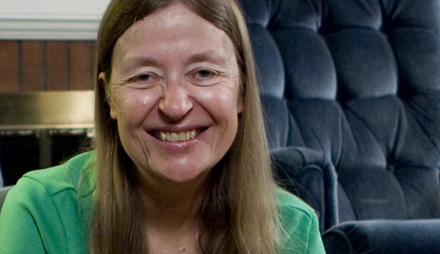 Elizabeth Tucker has gone back to her roots for her latest book.

Children’s folklore was Tucker’s original area of research: She did her dissertation at Indiana University on the storytelling of pre-adolescent girls.

Children’s Folklore: A Handbook is the first American survey of children’s songs, games, jokes, rhymes and other things children teach each other, since 1995.
“So much has happened in children’s folklore since 1995,” Tucker said. “The world has changed so much. So many rules about protection of children have changed. Children play in more structured circumstances. There have been many changes in cultural patterns, so I welcomed the chance to write this book.”

The book, released last month and available from Greenwood Press at the campus bookstore and through Amazon.com and Barnes & Noble, is meant primarily for college students, but also can be appreciated by parents.

“There’s so much that children do in their peer group that parents and other adults don’t see,” Tucker said. “It’s the childhood underground. Among children, there’s a certain kind of culture that tends to be transmitted especially when few adults are with them.”

Some things in children’s folklore have not changed. A child learning how to play “ring around the rosie” from parents would be an example of “nursery lore,” but “folklore” occurs when a child learns a similar game from peers with rhymes that do not come from adults. This still happens today, as it has for many years.

But as she started her new research, Tucker wondered if technological advances, such as video games, the Internet and more television, had affected the amount of active children’s folklore.

“I found that children’s folklore was as lively as ever,” she said. “It’s just morphed into different patterns.”

Tucker points to Japanese children using video cameras to play stone-paper-scissors and the “slam books” of the 1960s that featured girls writing about girls they did not like now giving way to interactive websites where the rankings of friends change.

“The same sorts of things happen, but technology alters their mode of expression,” she said. “Children are very adaptable. They roll with the times. Their traditions change and develop according to their interests and circumstances. But the need to share traditional culture with others does not change.”

Tucker, an associate professor of English, is also the editor of Children’s Folklore Review, an annual publication that is the only journal in the world devoted to the subject. Her other books are Campus Legends and Haunted Halls: Ghostlore of American College Campuses.