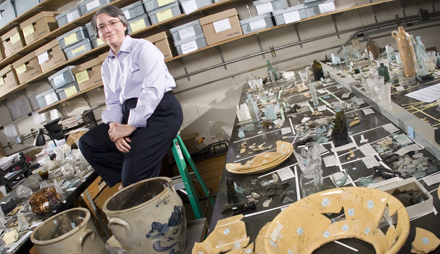 Divining the life stories of native North Americans who lived thousands of years ago but left no written records requires a unique blend of the social and life sciences. Thanks to a wealth of new data they’ve uncovered in recent years, and new techniques for extracting meaning from their findings, researchers at Binghamton University’s Public Archaeology Facility (PAF) are rewriting some of the most widely accepted theories about prehistoric life in New York state.

Much of the new information used by PAF’s archaeologists has resulted from cultural resource management investigations for economic development projects across New York.

Culling valuable data from ancient objects — stone tools, broken pottery, a few seeds, the remains of a hearth — archaeologists piece together a tableau of people who lived hundreds or thousands of years ago. “You take the data you have, you apply analytical techniques and then you weave the results into an interpretive story,” said Nina Versaggi, PAF director.

As PAF personnel discover new sites and apply more powerful analytical techniques, their interpretations of ancient diet, community organization, division of labor and group dynamics become more complex. However, these interpretations are not static. “Somebody 20 years from now will be able to re-analyze the same data with new analytical tools and add to the story,” Versaggi said.

For now, though, based on the work of the PAF, the story that is beginning to emerge about life before Europeans arrived in the region is more detailed and more complex than any version archaeologists subscribed to in the past.

Chronological sequences are one example. For a long time, Versaggi explained, archaeologists maintained that changes in prehistoric technology (tools and how they were made), “foodways,” or means of accruing sustenance (foraging vs. farming) and settlement patterns (seasonal movements vs. year-round villages) occurred at the same time everywhere across the region. Traditional chronological models stated that people changed the shape of their hunting tools or projectile points, replaced stone bowls with clay pots and began to plant domesticated species of maize, beans and squash according to an established temporal framework.

Archaeologists in the early to middle 20th century based these chronologies on data collected from a small number of deep, well-stratified sites. “Researchers accepted these chronologies as fact and adhered to them for decades,” Versaggi said. “They were used by us, and they’re still used by archaeologists today. They’re not invalid. But they tend to hide a wealth of variability that could be related to cultural and ethnic differences among prehistoric peoples.”

New analytical techniques have assisted the process of discovery and interpretation. For example, a new method of radiometric dating, Accelerator Mass Spectrometry (AMS), has become more accessible and affordable, allowing the facility’s teams to obtain a greater sample of dates from a larger number of sites than archaeologists did in the past. Sometimes, these new dates show that sites with certain artifact types do not agree with the traditional chronologies. This suggests that the boundaries between cultural periods aren’t as precise as scientists once thought. “We’re finding there are regional differences, and we’re finding these may be related to cultural differences,” Versaggi said.

PAF’s teams are not the only archaeologists to propose that regional variations in cultural material and sites are important to our understanding of the social aspects of prehistory. But they stand at the forefront of the movement to reassess the traditional, one-size-fits-all chronology and the interpretations that result from this framework.

“Because of the dynamic exchange of ideas between the Anthropology Department’s faculty and students, and PAF’s researchers, I think we probably were more open to a lot of these revisions and new interpretations,” Versaggi said. “As we continue to present and publish our findings, other researchers may use our results to justify and support the patterns they are finding. They’re linking into what we’re doing, either to enhance our models, or maybe to advance new models of their own.”